Olomide was slated to headline performances at the Chester Dean Arena in Lusaka Showgrounds beginning Wednesday, July 27 to Monday, August 1.

However, following the singer’s unfortunate display of violence at the Jomo Kenyatta International Aiport (JKIA) in Nairobi Friday, July 22, the Agricultural and Commercial Society of Zambia has bowed to public pressure and has drawn away his planned shows.

Several Zambians took to social media to call for the cancellation of Koffi’s Lusaka concerts after he was deported from Kenya following a row over an incident in which he was captured on video kicking one of his female dancers at the JKIA.

“Koffi has proved to be violent when musicians are generally peace ambassadors. In Zambia, he beat up one of his dancers and then a photojournalist, Mandela, at the Taj Pamodzi Hotel a year or two ago. Being an election year, Zambians shouldn’t be subjected to any form of violence. We have invested a lot in peace and that can’t be traded for anything – not for a concert,” ZAM President Njoya Tembo told Lusaka Times.

He added: “With this background, Koffi must be allowed time to handle his anger and emotions in peace, at home, in Congo DR. It is sad that a person we consider as a senior musician and role model in the region has gone on rampage assaulting women with impunity. He has proved to be bad influence in the past as well as in the present.”

“We therefore wish to applaud the Kenyan authorities for being uncompromising on Koffi’s behaviour, resulting in his deportation. We are confident that our relevant authorities will not allow him to come to Zambia, due to his emotional instability.”

Koffi Olomide was deported from Kenya on Saturday, July 23 after Kenyans and social media users across the world piled pressure on the state to kick him out following the violence he exhibited at JKIA.

The musician baffled many when he descended on his dancer, identified as Pamela, with kicks after he touched down at Kenya’s busiest airport, JKIA, Friday morning.

Koffi was irritated by Pamela who allegedly fell out with his lover Cindy Le Couer en route to Kenya.

In an interview on Citizen Television Friday night, Olomide denied he assaulted Pamela. Instead, he said he was defending her and other dancers from an alleged pick pocket.

Koffi Olomide was slated to perform at Bomas of Kenya on Saturday, July 23 – but the event, without volition, was called off following the singer’s kick out.

Below is the official letter from the Agricultural and Commercial Society of Zambia communicating cancellation of Koffi Olomide’s concert in the 2016 Show. 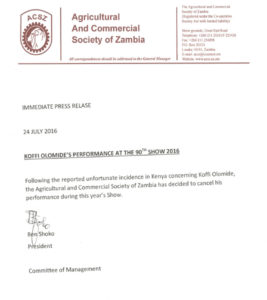