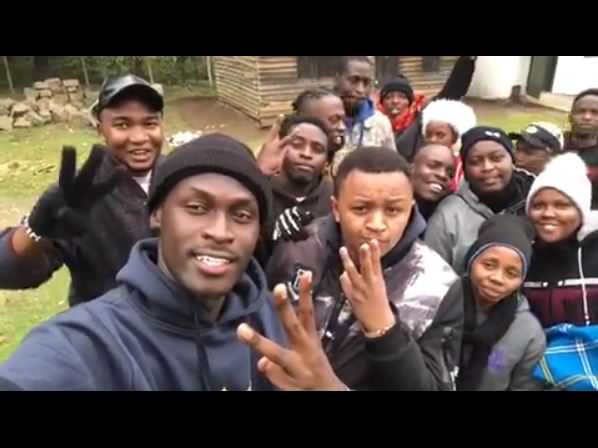 Kenyan Hip Hop maestro King Kaka’s ‘Menstrual Walk’ on Thursday entered Day 4, with the journey expected to end on Friday in Nakuru where the ‘Dundaing’ hitmaker and team will hold a mega-concert.

The walk, which began in Nairobi on Monday, is geared towards raising funds to buy sanitary towels for 100,000 school going girls through his ‘Bank On Me’ campaign.

“We have reached about 12,000 girls with the Bank On Me Sanitary Campaign so far and we hope to reach 15,000 more within this year,” said Dennis Njenga, King Kaka’s Manager and Co-Founder, Kaka Empire.

King Kaka, real name Kennedy Ombima, has taken to Instagram to update his fans and followers on the progress of the walk every step of the way since they set off.

On the first day, the group covered at least 36km before stopping over at Limuru; then 27km to Kinale; then Naivasha and Gilgil before reaching Nakuru on Friday upon which they will have covered a total of 157km.

The Menstrual Walk 2019 , Nairobi To Nakuru starts now. To Donate go to BankOnMe.Co.ke

King Kaka, according to his Instagram page, has suffered a few injuries along the way but shrugging all of them off saying “the walk continues.”

Day 2 watu wameshindwa kuamka. Wake Up!!!! As we continue with the Menstrual Walk , sore legs na maumivu but we have to soldier on, Our Next Stop Kinale 27km from here yesterday we covered 36km. Remember Kshs 600 keeps 1 girl in school for a year. To Donate go to BankOnMe.Co.ke

Injury Number 1. Wacha tukazane, The Menstrual Walk Continues our next stop is Naivasha. Go to BankOnMe.co.ke and Donate or Paybill 894889 Acc Name ‘MenstrualWalk’

Bank On Me Dennis Njenga King Kaka The Menstrual Walk