eDaily learnt that Mong’are did not submit his academic certificates, certificate of good conduct, HELB clearance form and certified copies of clearance from the Credit Reference Bureau as the position he held required. 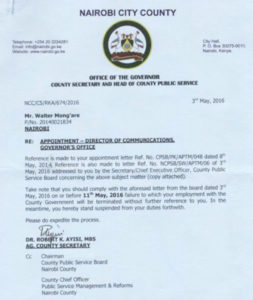 He was replaced, in interim capacity, by Noellah Musundi as the Director of Communications in the Office of the Governor, Nairobi County.

Noellah was the Director of Communications, County Government of Bungoma.

And in a letter dated August 2 whose undersigned is Dr Robert K. Ayisi, Mong’are was called back to work beginning Thursday, August 4. 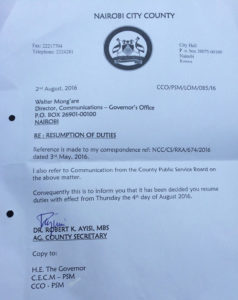 In a letter dated August 2 whose undersigned is Dr Robert K. Ayisi, Mong’are was called back to work beginning Thursday, August 4 PHOTO/EDAILY

Walter Mong’are was appointed Nairobi County Director of Communications in May 8, 2014; a position he held for exactly two years; before his suspension which has since been lifted.

Prior to his appointment to the lucrative position in Nairobi County, Walter had served as the head of communication directorate in Kisii County government.

Mong’are revealed to Citizen Television in December, 2015 why he left Kisii County for Nairobi.