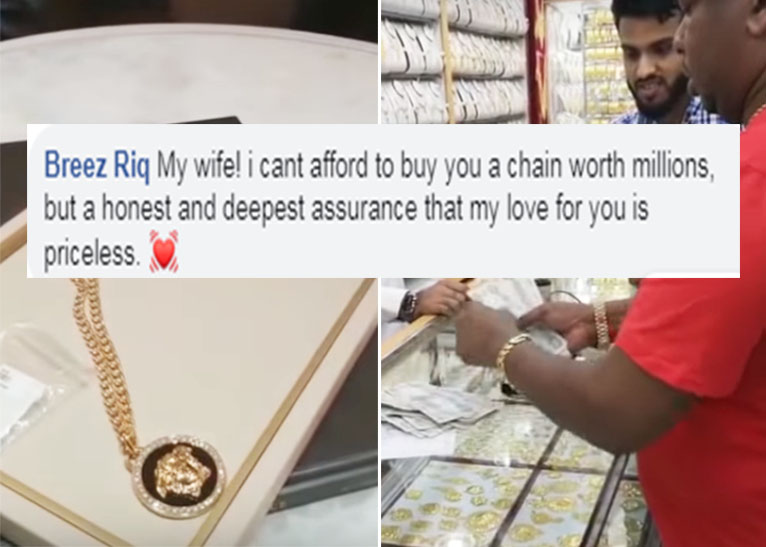 The governor said he was buying the piece neckpiece for his wife, Primrose Mbuvi.

“I am a fan of gold and Versace,” Sonko then says before asking his assistants to convert the price — 154, 200 UAE Dirham — to Kenyan shillings.

“You haven’t bought from us before. The neckpiece you have just purchased from our store is very unique, you won’t find a similar piece of art in any other store,” the seller told the governor.

The videos ended by showing Sonko counting the supposed payment over the counter.

Kenyans on Facebook took to the platform to share their comments – with a section shocked, others approving of the governor’s stunt, while others wished he could have used the money in charity.

Lin Davis said: “Some women are just lucky, I say. If a man does this [for me], I would not have any other man’s contact on my phone list. Mama Saumu, you are a lucky woman.”

Damaris Kariuki stated: “Sonko is doing this to show off. And, because Kenya has very many people in need, it is the best place to show off, or rather, boast. Why can’t he just buy the chain and take it to his wife without cameras [capturing the transaction]?”

Moso Oyo said: “The Ksh300 chain I bought my wife has kept our love growing by the day. Thank you, Lord.”

Scholar Chelangat remarked: “What did you say? A chain worth Ksh4.3 million? [He’s spending that money on jewellery], when I just need Ksh2 million to change my life? Life is totally unfair… Anyway, wacha nipambane na hali yangu, God’s timing is the best.”

David Otieno said: “I might want to give my honest opinion, but I will be called jealous. And, because Ksh4.3 million to me is a dream, I will reserve my comment. [Anyway], my Ksh400 chain from Ngara is good for my wife.”

Patrick Odongo said: “I bought my wife a Ksh90 chain two years ago, and whenever she puts it on, I am treated like a king! Imagine, for only Ksh90.”

Anzelimo Gacheru observed: “To me, this is bad show off. It might cost his wife her life or injury, given criminals have known the value of that chain. Shame on him.”

Von Thairu said: “[I approve of Sonko’s move]. It is good to enjoy [your riches] with your wife. Some men have a lot of money, but still frustrate their wives.”

Karen Mungania: “Where do people get such husbands? The only thing my husband has bought me is a cooking pot.”

Njeri Maina: “When will we, as Kenyans, have a peace of mind? The other day, it was Ringtone showing off, then Willy Paul, and now another one has joined the gang.”

Wanjugu Murage: “After spending the Ksh4.3 million on a neckpiece, you will, ironically, hear tomorrow that Sonko Rescue Team staff have gone for six months without salaries. Nkt!”

Nelima Yvannah: “That money is enough to bail us out of Tala chains.”

Mohamed Hassan: “He’s parted with Ksh4.3 million just like that? And he has forgotten the number of people who are sleeping hungry in Nairobi.”