The Nation Media Group has issued a statement apologising for publishing an ‘obituary’ bearing the image of businessman Jimmy Wanjigi.

The ‘death and funeral announcement’ published on the bottom left half, page 49, of the Daily Nation elicited a host of angry reactions from Kenyans online.

“It is with deep sorrow that we announce the death of James Richard Wanjagi on 30th January January 2018 which occurred after a failed armed robbery in Nairobi’s Karen estate,” read the announcement.

Despite the mix-up in the names ‘Wanjigi’ and ‘Wanjagi,’ the ‘obituary’ included eerily exact details pertaining to the prominent businessman’s life, including the names of his father, James Maina, and his wife Irene, as well as the school his children attend, the prestigious Institut LeRosey in Switzerland, and his company Kwacha Group which the paper referred to as Kwacha Industries. 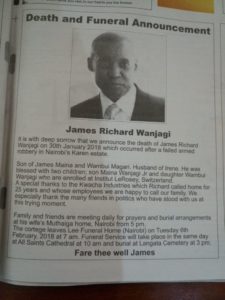 Below are sample reactions from Kenyans on the businessman’s ‘death’ announcement;

This is the state of the Kenyan media. We sympathize with them bit their incompetence can never be ignored. This is obviously Jimi Wanjigi who's well alive but @dailynation editors will tell that they didn't realize it #MigunaDeported pic.twitter.com/ohJXazE1tM

Jimi wanjigi should sue the @dailynation and the NMG for slander because of this article in the obituary section #MigunaDeported pic.twitter.com/137rW5DdsE

In an official statement, NMG has apologised for the error saying, “We refer to the publication of a death and funeral announcement of James Richard Wanjagi bearing the picture of Mr. Jimi Wanjigi that was erroneously published in the Daily Nation of February 7, 2018.”

“We regret the pain and anguish this may have caused Mr. Wanjigi and his family and sincerely apologise for this,” added NMG.

The media house further stated that they do not “condone such publication” and added that they had taken “immediate action against those responsible for the placement of the announcement, including the matter to the police for further investigations.”

Below are a few sampled reactions from Kenyans online over Nation Media Group’s apology;

Nation Media Group has apologised for the naughty death announcement. Next question: who drafted and paid for it ? pic.twitter.com/ZgSLi0uQlB