Kenyan online users have taken to social media to appeal to the police force to act with decorum and respect human dignity as the “stop police brutality” phrase became a trending topic after images of a section of CORD supporters being beaten to a pulp during anti-IEBC demos in Nairobi went viral.

The shocking scenes of violence erupted Monday, May 16th when police lobbed teargas to break CORD demonstrations urging electoral reforms ahead of the 2017 General Elections.

Police were caught on camera beating some protesters who had gathered outside the Independent Electoral and Boundaries Commission (IEBC) headquarters in Nairobi.

In the disturbing scenes that ensued, officers then chased the demonstrators through downtown streets and alleyways.

Some protesters hid in nearby buildings but riot police flushed them out toward waiting colleagues who then swiped at them with batons and kicked them as they tried to flee.

Photos of the gory scenes have since circulated online with Kenyans calling for action to be taken against police brutality that was witnessed on Monday. 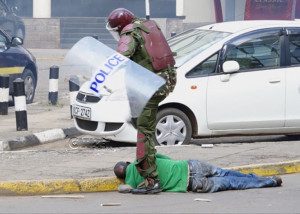 With the hash tag, #StopPoliceBrutality rising to the topmost trend in Kenya, Kenyans have spoken out:

David Onjili: What shall it profit a man to gain the whole world but lose himself? Need to check our values.

Karuth: Police turning Kenya back into a man eat man society. I think they should also think twice as they kill innocent souls. RIP.

Robert Alai: Nothing justifies this kind of raw and brute police force.

Hum Babah: Police are supposed to calm situations not to heighten the tension lets #StopPoliceBrutality.

Itumeleng Mtelo: I am so hurt by the images and videos from parliament today. The treatment of our grandparents is appalling.

Ahmed Saleh: #StopPoliceBrutality will happen to you tomorrow. Act deaf. But they will come for you and you will want justice.

However, some users said: “Police were just doing their work”.

George Gacheru: I completely agree with this but other people have rights too not just demonstrators.

Ronoh K Clinton: I wonder why people are cheated to demonstrate, ending up in hospital, stay at home, and be in peace.

Edgar Mutai: Why #StopPoliceBrutality? There should be no mercy for lawless protestors; the police are up to the task to secure life and property for all.

Eric Kogi: It’s time we all supported our police when they restore order,we have the best police force in Africa so nothing like #StopPoliceBrutality.