A United States based Kenyan woman, Christine Wawira, is breathing fire after Kenyan comedian Chipukeezy “refused to acknowledge a key role she played in linking him with world’s leading funnyman, Kevin Hart”.

Wawira, a single mother and actress who lives in Los Angeles, U.S.A., took to her social media pages on Thursday, October 19 to give a chronological account of what, she claims, transpired before, during and after the Chipukeezy-Kevin Hart meeting, which took place in June, 2017.

Wawira claims to be a “big fan” of Chipukeezy, and was determined to help him meet his idol, Kevin Hart. And when that happened, Chipukeezy gave credit to the wrong people, unnamed people, she said. 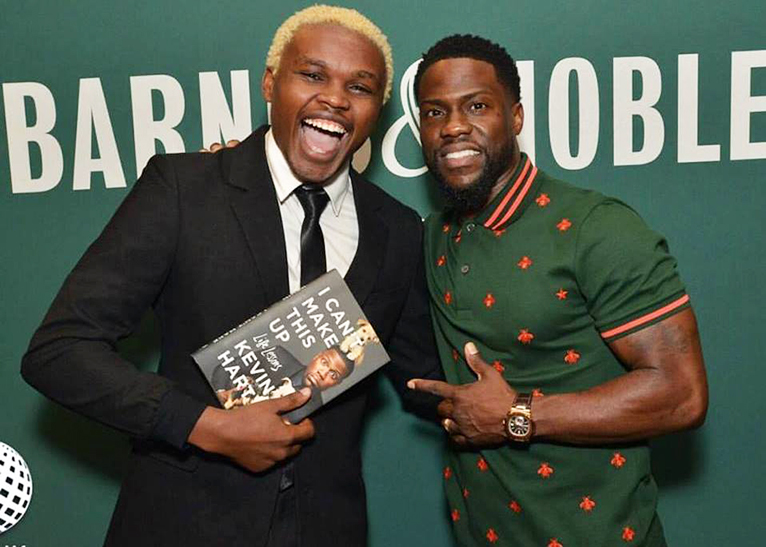 Below is a transcript of her revelation via a video on her Facebook page posted Thursday:

“I am a big fan of Chipukeezy, I follow him on Instagram. And when I’d see his work, I’d be like: ‘I want to meet him one day. He inspires me, and I like seeing Kenyans doing big things’.

“In May, 2017 I went to Dallas for Memorial Day weekend, and I met Njoro (Kenyan comedian who performs on Churchill Show). I guess Njoro told Chipukeezy about me. Njoro must have told him: ‘There is a Kenyan actress in Hollywood, who likes your work’. Chipukeezy reached out to me, he called me on WhatsApp video chat. I was excited because I was a big fan of his.

“When we were talking, he told me that he loved what Kevin Hart does. It just so happened that Kevin Hart was going to be in Barnes & Noble, Los Angeles signing books in early June, and I informed Chipukeezy. I told him: ‘You have to be around, at the Grove, by 9am. You can stay at my place’.

“I did not have money with me to buy another book. The struggle is real in L.A. Sankie, at first, hesitated buying Chipukeezy the book, saying she did not know him. But I convinced her after vouching for the comedian, assuring her that he will refund her the money after going to the Western Union.

“Sankie bought him the book, we hanged out together, went back to the Barnes & Noble, stood in the line and we got a couple of minutes with Kevin Hart – one or two minutes. And that was it. Chipukeezy then posted the picture, and it went viral, and it did great things for his career and I was so happy for him, and it made me happy playing a part in him meeting a hero in this situation.”

“Chipukeezy stayed in my house, he sat on my couch, I fed him. A day before meeting Kevin Hart, my phone got stolen in a bar, so I could not access my Uber account. So, we were like riding the bus and the train together. I was happy for him.”

“Yesterday (Wednesday, October 18), my friend said to me: ‘Have you seen an interview Chipukeezy did about meeting Kevin Hart?’ I was like: ‘No, I have not watched it. I just didn’t’. I, thereafter, watched it and I was shocked, when I heard him say that he performed in Dallas. In his words, he said: ‘this white woman approached him and told him: ‘Oh My God, you are so good, I know Kevin Hart, if you wanna meet him, he is gonna be in L.A. tomorrow (June 6). So, you need to fly out there’. He said the white woman gave him her business card, and he, thereafter, flew to L.A.

“He made up this story, which said he messed up when booking a flight, and that he, nonetheless, showed up at the airport and he could not get in the flight; and that he told the flight attendant: ‘Oh, my name is Chipukeezy, and I am a Kenyan comedian; and I am going to meet Kevin Hart, I need to meet him.’ And he showed her some of his work on YouTube, and that she allowed him to hop on the plane.

“Chipukeezy further said that a passenger in the plane had to sacrifice her seat for him. That is a bunch of crap. No one, who followed necessary procedure in booking a flight, can be taken off the plane to give room to you, Chipukeezy!

“Another lie he said was that he did not have money for taxi and that when he arrived at the bookstore and his transport fee was 200 dollars (Ksh20, 100), he just told the cab driver: ‘I am Chipukeezy, a standup comedian from Kenya, and I don’t have money on me. I am here to meet Kevin Hart’. You want to tell me the cab driver was like: ‘Oh, it is okay, be blessed. Have a nice day’? No, that is not happening in Los Angeles; it doesn’t matter if you are Kevin Hart, Tom Cruise or Chipukeezy, or me. If you owe 100 dollars (Ksh10, 350) to a taxi driver, you are going to pay that 100 dollars, or it is going to be a problem.”

Wawira says Chipukeezy also lied that, given he had no money on June 6, and had already reached the bookstore, a ‘white man bought him (Chipukeezy) the book after introducing himself’.

Wawira said Chipukeezy also lied that he, unlike other book buyers, who had only 1 minute to talk and take photos with Kevin Hart, got 10 minutes of Hart’s time, in which he (Chipukeezy) was “inspired and advised”.

“Chipukeezy said Kevin Hart invited him to the BET Awards. That was a lie.”

“I hate lies! For me, it is not even about: ‘Give me credit’. I am a Kenyan woman, who is in Hollywood, chasing her dream. I am a single mum and you know my struggle. He had an opportunity to promote Kenyans on his platforms, but he chose not to; instead, sitting there and spewing falsehoods on national TV and said a white woman helped him. A white woman that does not even exist! What are we doing with our culture? What are we doing as Kenyans? I was really upset, I texted Chipukeezy and I said: ‘Hey, I saw the interview you did about how you met Kevin Hart. What a story!’ And he said: ‘You are the white woman in my script.’ I said: ‘What? Why did you not recognise me in the story, instead deciding to ‘make me a white woman’? It could have helped me gain exposure.’ He said: ‘the media in Kenya was trying to say that I am a groupie, and that I flew here to just take a picture with Kevin Hart. So, I had to change my story’.

“He, thereafter, said: ‘I am sorry, but I had to protect my brand.’

“I was like: “Really, by telling Kenyans that I am the one who helped you; that will affect your brand? Really? That is so insulting by the way!”

Wawira says despite her bile, she is happy that Chipukeezy is “making more money, has been booked for more events and has headlined totally sold out shows”.

eDaily reached Chipukeezy for comment before publishing this story, but his phone was off at the time.

We will keep you posted on the developments to this revelation.