Nandi County Senator Stephen Sang says he lied about his age to his constituents so that he could secure a win in the 2013 General Election.

During the senatorial race in 2013, Mr Sang told his constituents that he was 40-years-old, while in reality he was 28-years-old. 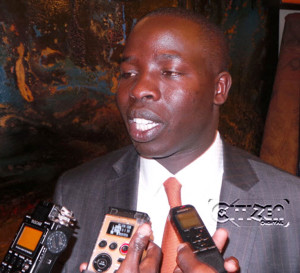 Sang acknowledges he comes from a traditional community that accords respect to the elderly – in Nandi culture the older a person is the more trustworthy and reliable is his leadership.

“I was elected senator at the age of 28. Initially when I expressed interest in running for senator, I lied about my age for purposes of increasing my chances of winning. The senatorial position is such a big leadership rank and you know I hail from a very conservative community,” Sang told eDaily.

“So when I started campaigning, I indicated that I was 40. As election date approached, I dropped the age to 37 and then to 35. By the time people were headed for March 2013 ballot, all the media knew that a 32-year-old lawyer was taking on former ODM Chairman Henry Kosgey. But immediately after election, I revealed my true age which was 28,” said Sang. “The trick worked for me,” he adds.

The University of Nairobi trained lawyer says he has no qualms retaining his seat in the August, 2017 General Election as he would have come of age.

“I have no problem because in the next election I will actually be 32. So it’s okay.”

His bid to represent Nandi County on national platform is a dream he cultivated from when he was a student in Kapsabet High School.

“In Form Four I knew that I was destined for public engagement. By then though, it was clear in my mind that I wanted to become a lawyer – which I am right now. I pursued law at the University of Nairobi.”

Like most Kenyan graduates, he realised that there was incongruence between his degree and his ambition.

“Immediately after completing university, I realised that law was not my thing. I still wanted to work with the people, work with the community. I ended up working in some nongovernmental organisations,” said Sang.

“My passion is to see a change in society. I come from a region which has been ignored and neglected for a very long time. We are still dealing with lack of very basic necessities such as water, roads, health care… I personally went through school with the support of the community. My passion was to see a whole new lot of young people, talented, ambitious like myself joining leadership positions. That explains why I thought being a Senator will give me that opportunity,” he says.