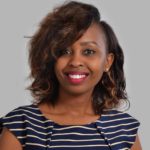 Popular Facebook icon and Jubilee Party strategist Pauline Njoroge has (quite almost) broken the Internet after she shared her very touching story on her very arduous climb to glory and the many hurdles that she had to painstakingly overcome to be the woman she is today.

Njoroge, who is one of the most if not the most influential women in Kenya’s social media today, recalled a story of how she walked right up to the gilded gates of Kenya’s Second President Mzee Daniel Moi in a bid to convince him to pay for her college tuition.

It wasn’t as easy as walking into a fish and chicken joint in town and what followed were years of a laborious struggle to join school, support her younger sister, keep her sanity together and climb the walls of higher learning.

And when she finally found that once-in-a lifetime to meet the former President, Njoroge says that she had a fruitful talk with him that, despite the old man’s promises, didn’t yield much.

But her determination and her resolve could only get stronger.

Njoroge would soon find herself at Catholic University where, even though she was seriously cash-strapped, she managed to forge a relationship that would soon open up doors she never imagined would once be opened.

IN THE FULLNESS OF TIME GOD MAKES ALL THINGS BEAUTIFUL! One day in 2006, desperate to find someone to support me…

And after a series of favors after Godly favors, Njoroge would soon wriggle her way from a biting poverty, bleak past, crunching times and hopelessness to finally find herself walking in the corridors of power and hobnobbing with the rich and mighty for whom she worked (and still works) and with whom she made monumental pillars of this nation’s politics.

And after 12 years of a mountain of ups and downs and even suicidal thoughts, Njoroge has finally graduated from Campus and her followers couldn’t handle the sweetness of the news.

Her story has captured the imagination of many and inspired thousands on Facebook.

Some of the people who trooped to the comment section to shower her with praises and congratulatory messages are Kiharu MP Ndindi Nyoro, Facebook campaigner Ndungu Nyoro, popular lawyer Wahome Thuku and thousands of others.

And with close to 10 thousand LIKES within just three days, the story of Pauline Njoroge reads like a Tyler Perry blockbuster.

The story of a little girl from a little, rugged village who scaled the walls of governance and who, with sheer determination, great people skills and a savvy social media knowledge, ends up becoming a bastion of hope and a formidable source of inspirations for millions of girls – and boys.