Betty Kyallo and her elder brother Brian Kyallo have come out rejecting claims that Brian had been handed a county job by Mombasa Governor, Ali Hassan Joho.

Governor Joho recently attended the swearing-in ceremonies of the new Mombasa county executive committee members. The new appointee to the Youth docket, was one Brian Kyalo.

Following the news, local bloggers – led by the controversial Robert Alai – launched claims that Governor Joho had appointed Betty’s brother as the county executive committee member for the youth on a silver platter. This, they attributed to a ‘relationship’ between the flamboyant governor and the media siren.

Betty Kyalo has since denied the claims, blasting the blogs for posting fake stories just to put food on their table

Via her Twitter timeline, the screen beauty posted a gif video of a yawning girl with the caption, “Only got one brother, Brian Kyallo, but I get it, the hustle to put food on the table is real; fake stories or nah…”

Only got one brother, Brian Kyallo😉 but I get it, the hustle to put food on the table is real; fake stories or nah #👊🏼 pic.twitter.com/2k4zEgqHXF

Her brother, Brian Kyallo, was also asked about the story by a fellow Twitter user and he just laughed it off saying he was “innocent.”

@GicheruGicheru I am innocent 😆 🙌 But I appreciate Alai's concern for Kambas and the perennial droughts 😂😂😂 … Kusema ukweli sasa … Nipewe hiyo ministry. 😩

Emerging reports, however, indicate that the man appointed as the new Mombasa County Executive Committee member for the youth is Brian Munywoki Kyalo. Munywoki was a staffer at Governor Joho’s first term in office, and has denied any relation whatsoever to Betty Kyallo. 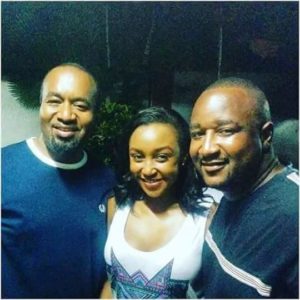