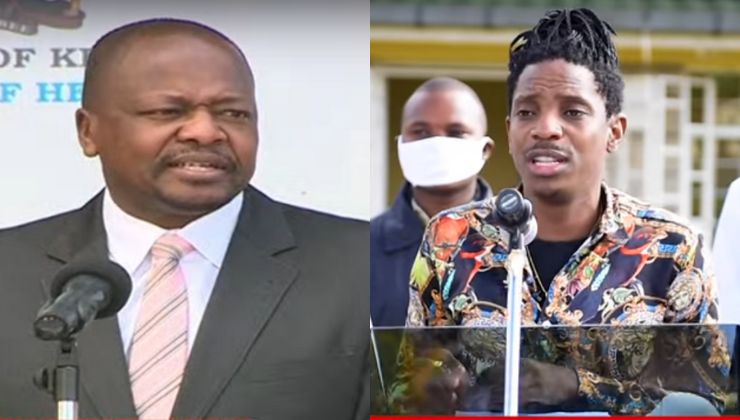 Eric Omondi, in the video posted to YouTube on Tuesday, seemingly mimicked CS Kagwe’s daily press briefings on the coronavirus pandemic in the country.

The comedian, hence taking on the character of a health minister named Mutai Kagi, addressed the rather comical situation of a Luo man named Kevin Otieno (also played by himself).

The character of Kevin in the skit returned to the country from the United States and defied orders to self-quarantine but, instead, went on to visit a host of female companions without going home to his wife.

Although Kevin eventually tests negative for the disease, the presumable message from the comical clip is Kenyans’ nonchalant reaction towards government directives.

CS Kagwe, while addressing the press on the state of Covid-19 on Thursday afternoon, seemingly referred to Eric Omondi’s clip saying: “Good afternoon ladies and gentlemen of the press. I’ll try very hard not to do it Eric Omondi style…”

He went on to announce that the country had recorded 5 more cases of the novel coronavirus, bringing the total number to 184.