On Wednesday June 8, the Laleiyo hit-maker woke up to a shocking realization that his car, a Toyota Fielder, was missing from the parking lot. 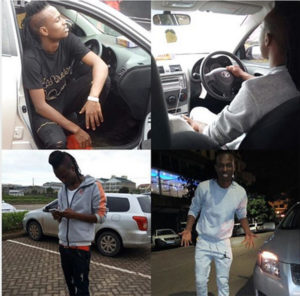 L-Jay Maasai says he is not comfortable disclosing the location of theft.

Speaking to eDaily, The Groove Awards 2016 Male Artiste of the Year said he has reported the incident to Industrial Area Police Station, and says he’ll follow up with authorities today, June 10 to know the progress of search.

“The Devil is a liar….he comes to steal, kill and destroy… My car was stolen this morning (June 8) at 4AM outside my gate. KCG 258G. Reported at Industrial area Police station. I Thank God I was left unharmed… (sic),” he posted on Instagram.

L-Jay Maasai succeeded gospel bigwig Bahati as the Male Artiste of the Year in 2016 Groove Awards.

Groove Awards 2016 winners were unveiled on Wednesday, June 1 at the Safaricom Indoor Arena at Kasarani in Nairobi.