Governor Joho, known for his wealth and flashy lifestyle, posted photos of himself wearing the Run Away Louis Vuitton sneakers on Instagram during the National Supper Alliance (NASA)’s ‘People’s Assembly Convention’ held at the Coast during the weekend.

The convention was attended by Opposition chief Raila Odinga, Kilifi Governor Amason Kingi and NASA strategist David Ndii among a host of other leaders.

A quick look-up of the shoes from the official Louis Vuitton site reveals they are valued at $895. 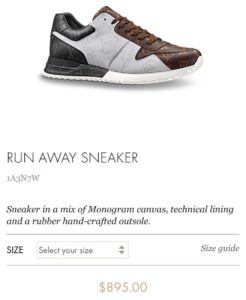 Going by the current exchange rate, this figure translates to Kshs 92 185.

Governor Joho has previously been named as one of the richest politicians in Kenya.