Mombasa County Governor Ali Hassan Joho did not score grade D- (minus) in Kenya Certificate of Secondary Education (KCSE) as certificate which has gone viral on social media suggests, says his rep, the Mombasa County Director of Communications, Richard Chacha.

The controversial certificate shows Joho sat for his KCSE test in KCSE 1993 at Serani Secondary School in Mombasa and scored grade D- (minus). 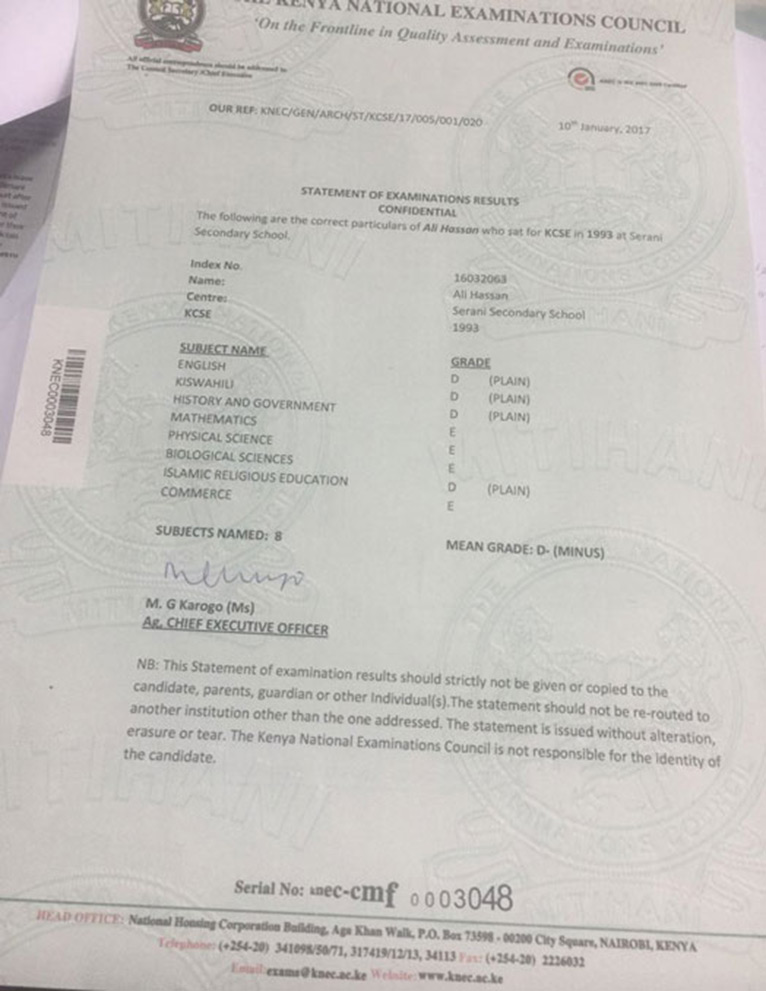 As per the result slip, which Chacha has labeled as fake, the then-candidate scored D (plain) in English, Kiswahili, History and Government, Islamic Religious Education; grade E in Mathematics, Physics, Biology and Commerce.

“That is propaganda. The governor of Mombasa is called Hassan Ali Joho; the name inscribed on the said certificate is Ali Hassan. A Form Four certificate by KNEC bears three names. So definitely, that certificate doing the rounds on social media is fake!

“Look at the title of the Kenya National Examinations Council in the upper part of the fake document, it is written in upper case. No one has his or her KCSE certificate with the KNEC title written in capital letters.

“And the date the fake certificate was printed reads January 10, 2017. Do you think Joho got his KCSE certificate two days ago; does it even sound logical, let alone convincing?”

“The propaganda, nonetheless, won’t affect Joho’s reputation in any way. His political enemies are trying to use all means to bring him down,” said Chacha.

These claims come nearly a month after the Mombasa County chief graduated with a Bachelor’s Degree in Commerce, Human Resource option from Gretsa University in Thika.

Governor Joho, who did not attend Gretsa University’s 11th graduation ceremony on December 14, 2016, got a Second Class honours, Lower Division.

Gretsa University Vice Chancellor (VC) Kibathi Mbugua confirmed to eDaily that the County executive was studying at the institution since 2014 on Distance Learning Programme.

The VC emphasized credibility of the university’s degrees, saying politicians are not awarded with degrees that they did not work for.

An earlier degree in Business Administration from Kampala University was disputed by the resident district commissioner of Kampala Zaina Muwonge, resulting in the degree being declared invalid by the Uganda National Council of Higher Education in May 2014.

Kampala University through its legal advisor John Kabagambe would later come out to clear the name of Ali Hassan Joho, saying the Mombasa county governor had not forged his university certificate as it was earlier alleged.

Kabagambe added that the matter concerning joho’s academic qualifications was put to rest by a Kenyan court prior to the 2013 general election.

Governors and deputy governors are required to have degrees from universities recognised in Kenya, as a basic requirement to run for elective post.