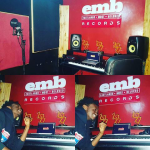 The Groove Awards Male Artist of the year has signed on his first artiste, Weezdom.

Weezdom, who grew up at Huruma near Mathare slums, is a young singer and rapper who has experienced numerous difficulties including drug abuse.

Bahati will be releasing Weezdom’s first song at the studio, Faham on Friday.

“I believe God will use his music to speak to the hearts of many,” the Mama hit maker said. “I will try my best, as God helps me, to introduce and support new upcoming artistes each year.”

Bahati launched his new studio early October, making the announcement on his official social media pages. Remembering the hardships he experienced on his way to the top, Bahati said the studio would target underprivileged youth who have musical talent.

“I might not be in a position to help everyone, but I’ll be here to make sure this production house gives every artist the best quality whether you’re an uprising artist or established; with reasonable studio fees to help everyone achieve their goals and dreams,” he noted at the launch.

Of all possible locations for a studio, why did Bahati choose Eastlands?

“My mum always told me to always remember where I started,” revealed the artist.

To attract musicians to the stable, Bahati pledged to pay half the registration fee for the first 20 artistes who sign up.

Just by looking at him, one would not imagine that Kevin Bahati has had such a difficult life.

His mother, who was his primary caregiver, died when Bahati was just 13 years old. With no guardian left, Bahati decided to go to the ABC orphanage in Mathare slums where he was assured of shelter and education.

Fortunes changed drastically for the golden voiced singer in 2012, when he tried his hand at music. After just 8 months in the gospel industry, Bahati walked away with his first Groove Awards trophy.

Since then, his career has been on an upwards trajectory and the singer has released numerous tracks among them Barua, Lover and Kuchu Kuchu.