Gospel singer Willy Paul on Tuesday, May 2, walked out on Groove Awards nomination ceremony, which took place at the Manu Chandaria Auditorium at the University of Nairobi.

Willy Paul, who arrived at the UoN at around 7:15pm in the company of Hopekid, DK Kwenye Beat and DJ Mo, walked out of the auditorium a few minutes to the end of the event after learning that he wasn’t featured in any category in the list of nominees. 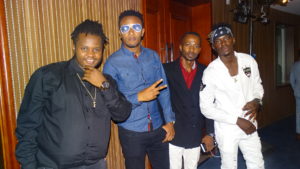 The following are some of the key categories and the artistes who bagged the nominations:

Last year October, Willy Paul won the Best Gospel Act in Africa in the Afrimma Awards ceremony which was held at Dallas city in Texas Saturday.

Speaking to eDaily, Willy Paul thanked his fans for voting for him – saying sometimes a prophet might not be accepted in his home town, but a vast populace sees his or action; and according to him, his win is a classical case.

“I thank God for the win. Some people would probably say Afrimma ‘gifted’ me the award; but that is not the case. I have been consistent, creative and appreciative of genuine support that I get from fans,” Willy Paul said.

The “Fanya” hit-maker also revealed that a lot of collaborations with international gospel acts were in the pipeline; and to him, his conquest of the continent in the gospel world was just the beginning.

Willy Paul also took some time to send a message to his haters:  “I pray for them. They should know that it is God’s will that would always prevail. Though I thank them for positive criticism that has helped me get to where I am today.”