Mr Thuku had taken to his social media on February 14 to caution motorists of the speed bumps erected along the highway predicting that by doing so the government had subjected that particular area to being a black spot.

“As you go down the highway towards Naivasha just after Kinungi trading centre the govt has erected two bumps smack at the hill. They were erected on Thursday evening and now I can say that is a black spot,” read the post.

Thuku further implied that the spot would be accident prone following his observations of motorists trying to avoid the newly erected bumps.

“Already there is evidence of broken glasses on one of them. Today we observed as motorists were forced to cut the speed from 100kph to 10kph in a matter of seconds to go over the bumps.”

He further went on to give a chilling prediction of the possible accidents to occur along the highway.

“Expect horrible accidents there. In fact start preparing for a fatal crash.”

The tragic Naivasha accident that has so far claimed 33 lives occurred when a lorry carrying highly flammable materials hit a bump at the Karai area along the highway leading to it colliding head on with oncoming traffic.

It was not long before the lorry went up in flames burning over 10 cars that came into contact at the scene of the accident.

Transport Public Secretary Irungu Nyakera on Sunday during a press briefing said that the bumps were erected following requests by the locals who had complained of a number of accidents occurring due to speeding motorists.

“What we are looking at is the design of the bumps to see whether there is a better way of doing it, maybe they’re too sharp,” he said.

Our heartfelt condolences to the affected families and quick recovery to the injured. 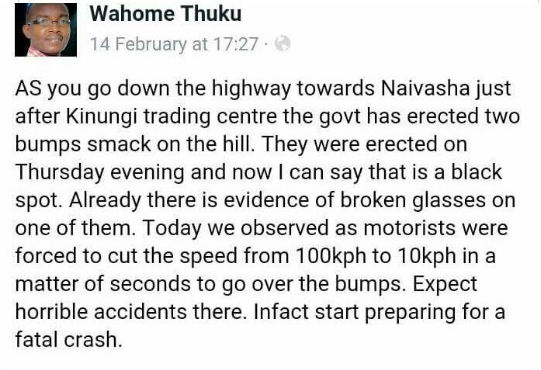