Roberson was a member of the now defunct girl group that featured Beyonce, Kelly Rowland and LeToya Luckett.

Sources privy to the actress told the outlet that the Grammy award winner was rushed to hospital for pregnancy-related complications on July 4. 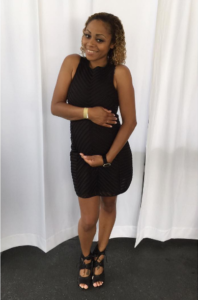 Information about her condition has remained scanty. Speculations, nonetheless, are rife that Tavia’s condition has not yet stabilised.

Awww 😢😢😢😢
I pray LaTavia Roberson is okay. Bad baby news is a lot of heartache for any expected Mom to be to deal with.
Geessh.

Representatives of the 34-year old singer are yet to comment on the reports which emerged days after the mother-to-be posted a photo of herself in a bathing suit- posing by a swimming pool.

The singer rose to fame as one of the pioneer members of RnB group Destiny’s Child, but she and fellow band mate LeToya Luckett left the group in 2000 and were replaced by Michelle Williams and Farrah Franklin.