A foreign explorer has excited Instagram users – especially in Kenya – after he proposed to his girlfriend, a Danish national, on Mt Kenya on November 17.

The explorer from Denmark identified as Torbjørn C. Pedersen aka Thor – who goes by fictitious name ‘Once Upon a Saga’ on Instagram – is an explorer who has embarked on a mission to travel to every country in the world without using a flight.

Thor, who was in Kenya recently – for the first time – climbed up Mt Kenya and proposed to his lover – who happily said ‘yes’. 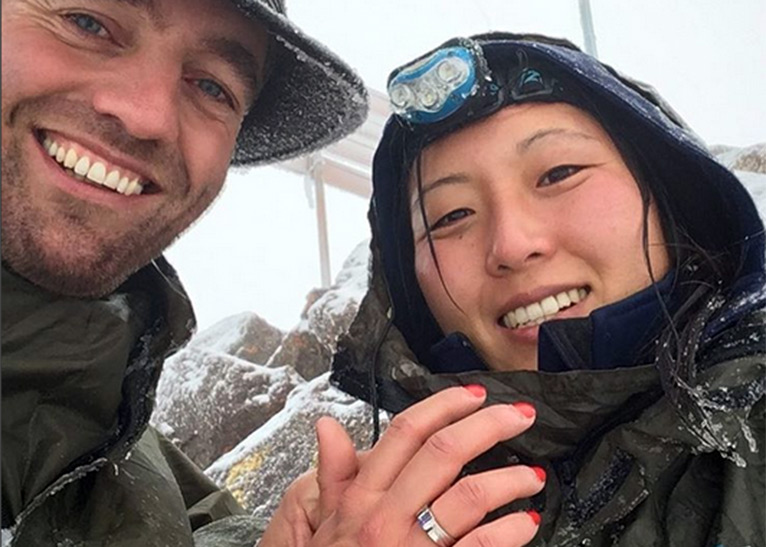 “If you like it then you better put a ring on it. Having been through 121 countries without the use of flight or having returned home over the past 3 years, I finally reached Kenya. In the same time period my one of a kind girlfriend has been able to visit me 9 times making Kenya the 10th!

“Together we hiked to Mt. Kenya’s Lenana summit at 4985m. The weather was severely harsh but could have been worse. We reached the summit for the sunrise at 06:15am (on November 17), however the sun couldn’t shine through the thick clouds. I got down on one knee and presented her with a question and a ring. She happily said yes and I am proud to present you all to my fiancée! Kenya will become from today henceforth a very special place for the both of us,” said Thor on November 17.

Thor decided on October 10, 2013 to embark on a world tour that would last three to four years – and with a target of visiting 203 countries within that period.

Kenya, best country in the world

In his blog post dated November 26, Thor says Kenya – according to him –, is the best country in the world.

“Defending Kenya as the best country in the world is kind of an easy job. Kenya isn’t perfect and I haven’t been to a country which is. If you want all the negativity then pick up a newspaper.

“However, Kenya is one of Africa’s strongest economies, highest developed countries and is easily a strikingly beautiful place to visit. In fact I’ve found that you can often see very far across the landscapes which just make Kenya look extraordinary large to me! And it is in fact a large country with an abundance of wildlife and tourist attractions. Do you like the beach? Great, there’s plenty of it. Do you like hiking? No problem, Kenya has it in excess. Do you want city life? Please check out the stores, clubs, restaurants, markets, cinemas and parks of Nairobi. Do you want culture? Dive into more than 40 different tribes. Safari? You’ve got it!! Hakuna matata.

“Since my fiancée boarded her flight back to Denmark last Sunday, I have checked out of the luxurious Boma and into the neighboring Boma Inn. The Boma Inn was the first hotel which the Kenya Red Cross built around 16 years ago. All profits fund the Kenya Red Cross so that’s quite clever.

“I’ve generously been offered a room for a week, but it might be a lot harder to stay next week as December is approaching! Apparently Kenyans are quite ordinary people most of the year. Kenyans have families, hobbies, play games, update Facebook, get stuck in traffic, go to work, study and all that ordinary stuff we share with the rest of the planet. BUT: Then December comes!!!

“I’ve been told that Kenyans save up all year for December, when they apparently go bonkers for a month and spend all their money?!? So that’s going to be interesting! That could also mean that the Boma and Boma Inn might get fully booked. And that would actually be great news which I’ll explain in a bit.

“The Kenya Red Cross is something of an anomaly within the world of the Red Cross Red Crescent. It’s immensely powerful and extraordinarily active throughout the East African region and especially in Kenya. To give an example (apart from the 2 impressive hotels) Kenya Red Cross runs Africas second largest privatized ambulance service! I’ve seen the call center and it’s really quite impressive.

“Something interesting came to mind as I was learning about maintenance: The Red Cross ambulances are well equipped and routinely get replaced after 150,000km (93,000mi). Since I left home in 2013, the Saga has brought us across more than 151,450km (4 continents). Maybe it’s time for me to get replaced 😉 That distance is somewhere between 3-4 times around the planet and we’ve still got 82 more countries to cover. I’m so exhausted…on that note this is the Friday blog and it’s Saturday while I write it. I’ve got no real excuse for delivering a day late except for being tired. To use a Lord of the Rings reference I could say: “I feel like butter spread over too much bread…

“At times I do wonder if I’ve bitten off more than I can chew? Simply getting from country to country would appear to be more than enough for anyone. Adding the social media and the Red Cross doesn’t make it easier. And the mental toll is hard to escape. I need a new firm landmark for the Saga to boost my spirits: I need to leave Africa successfully.”