Floyd Mayweather and Conor McGregor are on the verge of agreeing the richest fight in boxing history, says The Sun.

Money Mayweather – currently retired with the joint best boxing record in history of 49 wins from 49 fights – is set to fight McGregor in Las Vegas later this year. 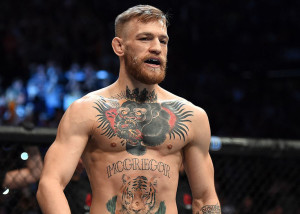 The Sun reports Mayweather and McGregor just have to agree on the purse and sign paperwork. Sources told the news outlet that the agreement is imminent and an announcement is likely to be made in the coming weeks.

“Floyd went mad after Conor said he would crush him and knock him out in 30 seconds, he’s obsessed with making Conor eat his words,” a source told The Sun.

“Floyd is calling the shots. It’s strictly boxing and Conor will have to lose roughly 25lbs.

It was agreed in principle on May 2, but Floyd wouldn’t reveal the identity of his opponent until last night when he told friends he’ll be fighting Conor.”

The two have clashed before when Mayweather claimed the Irishman’s popularity was partly down to racism.
Money has been left furious that McGregor has not been criticised for his ill-talking to the same degree as he has.

“They say he talks a lot of trash and people praise him for it, but when I did it, they say I’m cocky and arrogant. So biased. Like I said before, all I’m saying is this: I ain’t racist at all, but I’m telling you racism still exists,” Mayweather said in an interview with Fight Hype.

Conor McGregor then challenged Mayweather to a boxing match to settle their differences.

McGregor is a lengthy 9/1 shot for victory. However, the betting would be very different if the match was a mixed martial arts contest rather than straight boxing.

Mayweather would be available at 8/1 in that case with McGregor the 1/16 favourite.

“If the two men were to meet in a boxing match, Mayweather would be a long odds-on favourite to come out on top as the unbeaten former five-weight world champion is considered as one of the greatest boxers there has ever been in the sport,” a Coral spokesperson told Express.

“The odds would more or less flip on their head though if it was a mixed martial arts contest as that would then play into McGregor’s favour in the intriguing showdown.”