Becoming famous is no doubt a treacherous journey in any part of the world, and even harder in a developing country like Kenya.

To be mentioned in a prime time bulletin or even earn your space on the cover of a local newspaper and have Kenyans know you by name takes a lot of hard work and rising from the very bottom.

It is also true that this ‘hard work’ cannot be said to be in any particular field because time has proven that an array of ‘achievements’ are sure to interest the public and earn their admiration in the process have your name linger in their minds.

Read Also: Who is this man Paul Nkata, the latest KPL king?

Over the years, there has been a growing constituency of people becoming famous for all the wrong reasons. But like their peers on the positive side, they also put in a considerable amount of hard work to get their faces on the screens.

From the selfie scuffle to alleged involvement in unresolved scandals spanning decades and to a brief bout of near-madness here are five Kenyans who we came to know for everything but the right reasons. 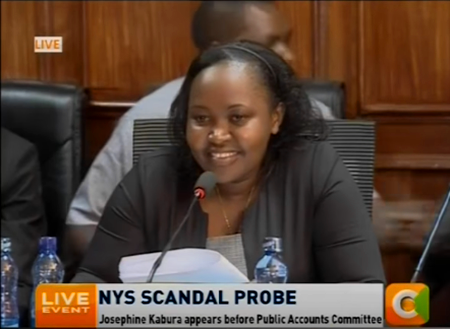 It is no doubt that this young Kenyan has become a household name over the past year or so.

At 35, Kabura is at the centre of one of the biggest scandals that dog the Jubilee government; the National Youth Service (NYS) scam.

A woman described as ‘a mere hairdresser’ by former Devolution Cabinet Secretary, Anne Waiguru, is accused of fraudulently receiving Ksh 1.67 billion from the NYS.

In a 16-page affidavit filed in February 15, 2016, the businesswoman accused the former CS of being behind the Ksh 791 million NYS scandal, but appeared to disown it during a dramatic appearance before the Parliamentary Public Affairs Committee on November 1, 2016 where she refused to state how she knew the former CS, who called herself a whistle-blower in the matter.

She told the committee that was angered by her dodgy answers that she registered 20 companies, all of which were awarded mega tenders from the NYS.

Kabura has a Diploma and Higher Diploma in Information Technology (IT).

Her story is still on the lips of many Kenyans who are more than surprised by her ‘achievements’ in very few years and in a theatrical way made many question their life choices.

From loaning a supposed friend Ksh 60 million and having no recollection of her being paid back, to transporting Ksh 52 million all by herself to pay quarry owners she can’t recall, Kenyans are sure to continue talking about this mind-boggling scam and Kabura in the coming years.

And with the chatter, theatrics of Kenyans on Twitter.

#TestimonyTuesday to be honest, 99% of Kenyans silently admire #Kabura and wish they were Kabura…moving around with 52million Ksh in bags

They made #Kabura to use n dumb her, now she is outsmarting them n running away with all cash #NYSscandal @AnneWaiguru n co.

So #Kabura got 100M to pay for quarry stones and she doesn't know the name of the supplier in ongata town. 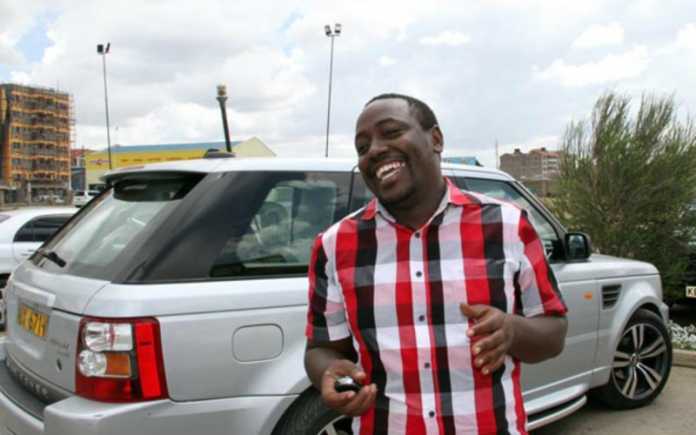 Little known Pastor Kanyari came into the limelight in 2014 after he was exposed apparently ‘robbing’ people in the name of God in a television documentary.

Video recordings showed how the self-proclaimed prophet prepped people on his payroll to give testimonies of his miracle-working prayers to convince hapless congregants to ‘panda mbegu’ (sow a seed in form of money to receive blessings).

The ‘prophet’ was shown to record fake interviews with ‘believers’ who testified of how the Ksh 310 ‘mbegu’ paid to him for prayer had changed their lives and then played back on his radio show to inspire listeners.

Even after huge public outcry after the documentary aired and calls for his arrest, the ‘man of God’ appeared unapologetic saying that he had never forced anyone to send him money.

His subsequent appearance in comedy shows continues to anger many Christians, but the buoyant pastor who is significantly rich continues to sell a better-the-devil-you-know demeanor as he carries on with his ‘prophetic ways’.

Pastor Kanyari's church is still in operation even after the exposé .

we criticize Pastor Kanyari for nothing on mbegu 310 "yet he ask genuinely. This are the people to be criticized

Betty Bayo has a new song featuring Mr SEED after a scandal about her hubby Pastor Kanyari and MBEGU aka 310? #SwalaNyeti 😂😆 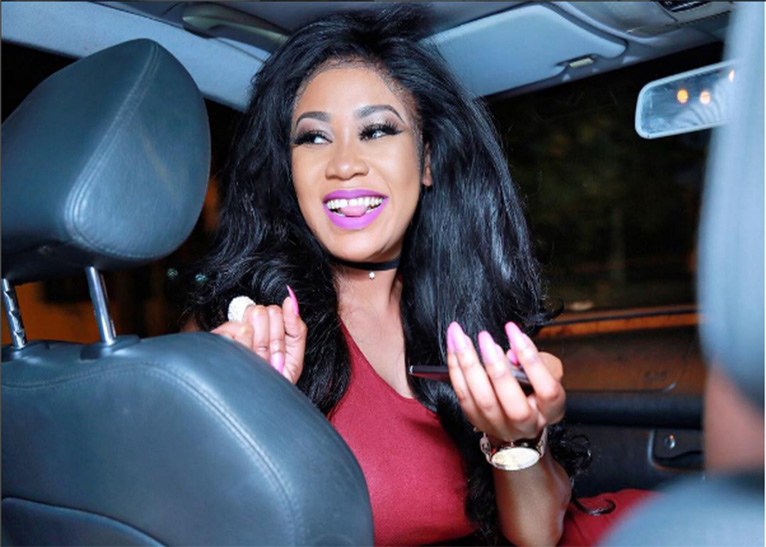 Born September 1989, Sidika is one woman who introduced Kenya to the world of socialites after attracting huge attention as a video vixen in P-Unit’s ‘You Guy’ single in 2012.

The fashion model and entrepreneur who joined Kenyatta University in 2009 to pursue studies in Art and Design would a few years later prove to Kenyans that the body is a convertible form of currency.

After being featured in ‘You Guy’, who was then modelling as a plus a plus size model went on to feature in musician’s Prezzo’s ‘My Gal’ in 2014, a year which she caused yet another stir by admitting that she had undergone a skin lightening procedure in the UK.

Vera claimed the procedure cost her over Ksh15 million and despite massive trolling online the 27-year-old was undaunted telling off critics that: “My body is my business, nobody else’s but mine. It is my money-maker.”

In the book Home Girls Make Some Noise: Hip-Hop Feminism Anthology, Gwendolyn et al observe that the video vixen image has become a staple and a nuanced form of sex work within popular music.

But even with critics pointing at the typical placement of music video models in subordinate and submissive roles with male artistes in positions of power, Vera managed to transition into a, albeit unconventional, successful career path of a socialite.

Socialite, a term that dates back to the 18th Century is attached to being wealthy and socially recognized with Vera rising to accrue power and influence that a pitiable video vixen can only dream of.

It is courtesy of ‘Kenya’s Kim Kardashian’ or Vee Beiby’ as she is also known, that a growing list of socialites is becoming more acceptable by Kenyans and young girls can actually set such a career goal. 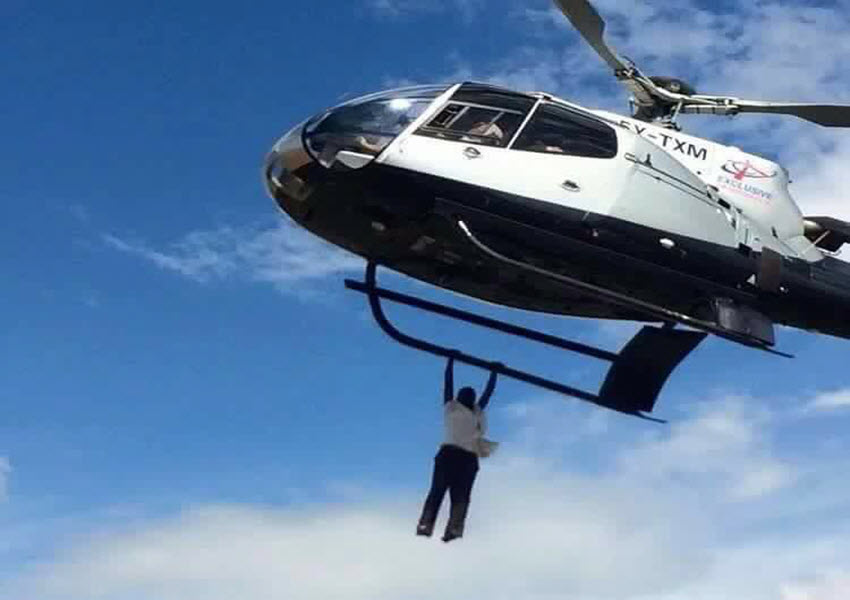 A lot of my peers agree that (in all fairness) ‘interesting’ stories come from Bungoma County, and in May this year a man rose up to the #BungomaChallenge that frequently features on our #CrazyWorld segment to add to the narrative.

Bungoma trying so hard to get into the bible. James Bond,Wheelbarrows,Jehova Wanyonyi and now this #BungomaChickenAffair

Read Also: After dandiaring a chopper, here is the juicy offer that the daredevil Bungoma man has gotten

It was during the burial of slain city businessman Jacob Juma where Saleh Wanjala shocked Kenyans by hanging on to the helicopter carrying his body from Posta grounds.

After a short flight, the 41-year-old who blamed a bout of insanity for the life-threatening act, let go and fell injuring his backbone and right hand where he was later admitted at Bungoma County Referral hospital.

An area politician, a day after the bewildering incident offered Wanjala a helicopter ride to a destination of his choice in the country saying the man should be considered a hero and could potentially attract tourists to the county.

So compelling was the story that a creative app developer had to make a game out of it. Mike Dee’s ‘Bungoma Hangman – Survive by hanging on to dear life’ has an impressive 50,000 downloads on Android platform alone.

And now we all know him!

#100WaysToBeKenyan Competition is real in Kenya.
What stupid thing do I do to be rewarded like Bungoma James Bond? pic.twitter.com/482oKvsExq

An innocent narration by Joseph Mburu in 2013 of how police gunned down thugs in Nairobi’s Kasarani area to a TV crew would moments after the clip aired earn him unprecedented fame in the interwebs.

The ‘nikama ndrama nikama vindeo’ (It was dramatic, it was like a movie) phrase that many people still use today to describe surreal situations did not only make Mburu famous but would see him do a TV commercial for giant Kenyan telco, Safaricom.

While his was not exactly a bad reason at all to be famous, and that it even involved some degree of hard work, the natural comic would never had been heard of if he had been unfortunate enough to have had a mastery of the English language. 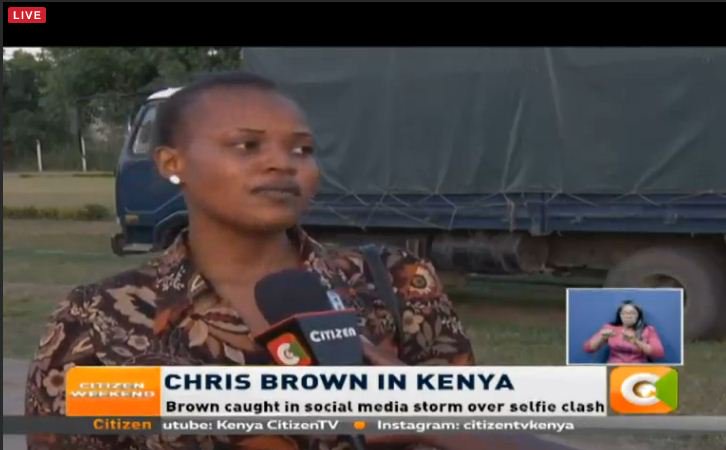 Never again has a selfie scuffle caused so much stir in Kenya than during American pop star Chris Brown’s touch down at Moi International Airport (MIA), Mombasa in October for a highly hyped concert.

Read Also: Why Kenyan woman accused me of smashing her phone: Chris Brown

An overenthusiastic lady, Brenda Chepkoech was on standby to exercise her ‘selfie rights’ at the airport soon after the 2012 Grammy Award winner alighted from his private jet.

Her innocent wish was however not going to pass as the singer was not in the mood for a selfie with a Kenyan fan during his first visit to Kenya.

Disappointed and probably embarrassed, Chepkoech made a drastic decision that will in years  to come be more remembered than the multi-platinum-selling singer-songwriter’s electrifying performance during the first ever Mombasas Rocks Festival.

She claimed that Brown had snatched her iPhone and smashed it against the ground as she attempted to take the selfie, claims that were picked up by local media outlets and went viral on social media before his promoters had a chance to tell their side of the story.

The hashtag #DeportChrisBrown was a top trend in Kenya on Twitter for the better part of Saturday October 8, even before the pop star’s performance and with it, yet another Kenyan became famous for another wrong reason.

MIA security and the singer’s promoters came to refute the claims even as a video surfaced further disproving Chepkoech’s strong accusations.

Despite all this, Brown had some beautiful things to say about Kenya and her people after the concert.