When nominated Member of Parliament for Special Interest Groups Isaac Mwaura tied the knot with the love of his life Nelius Mukami-Mwaura last year June, Kenyans were impressed – and took to social media to wish the newlyweds well. 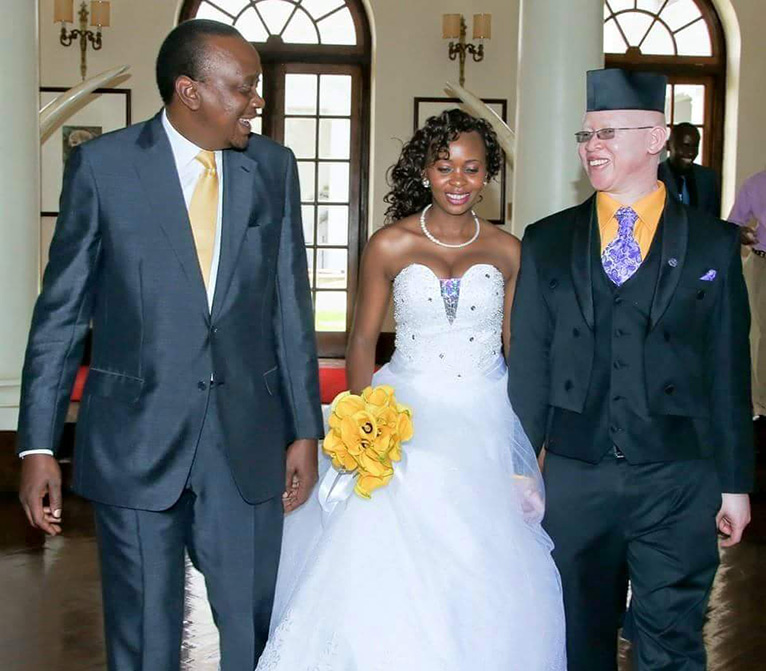 Mukami and Mwaura toured the State House, Nairobi after tying the knot in June, 2015. President Uhuru Kenyatta received them [PHOTO/COURTESY]

It is now one year and five months since the two exchanged vows and MP Mwaura confesses to loving Mukami more – reason being: she has proven to be a bulwark who won’t tolerate derogatory statements made toward her husband due to his skin colour.

“She doesn’t take it kindly when people make harsh remarks about my skin; even if some of the challenges would stem as a result of me living with albinism. I like that. She shells me. That is the most important thing. Her family approved of me,” Mwaura told eDaily in an exclusive interview.

Creative, unassuming to her own ways, a home-maker are some of the descriptions Mwaura has about Mukami.

“She loves design work and often dresses me up. She is very good at organizing. Actually, she is the one who planned our wedding. She runs a fashion house – Mukami and Mwaura Fashion House, which is doing well in the market – all credit to her,” Mwaura said. 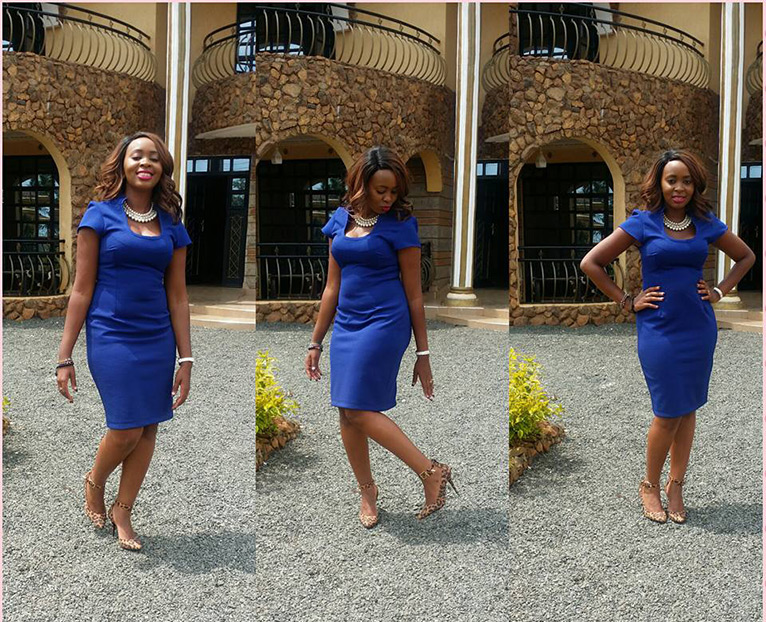 Mukami loves fashion, hence an explanation to her good sense of style [PHOTO/COURTESY]

Mwaura said Mukami looked beyond his skin colour when she accepted to date him – and interestingly, they met via a mutual friend. 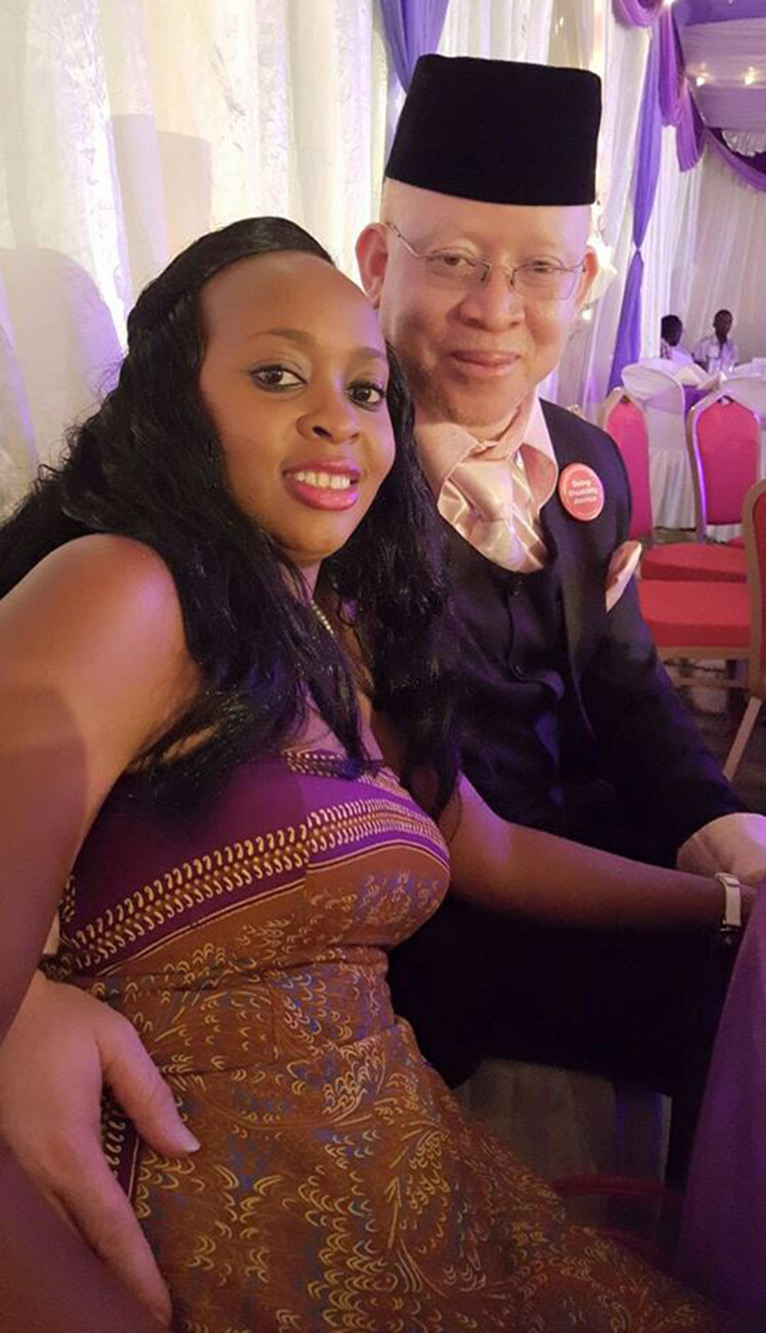 Mukami and Mwaura met via a mutual friend [PHOTO/COURTESY]

“We met through a mutual friend namely Washington – who is deaf. They were classmates at the University of Nairobi where they were undertaking an undergraduate course in Political Science.

“We set up a date – that time Mukami was working for Transparency International; I took her to town (Nairobi CBD) and I would say the rest is history. Actually we had separated and got back together after a year or so. If someone is yours, God has a way of making you get back together. I can tell you for sure that I am extremely delighted that she is my wife because she has been very supportive. She is an independent woman with her own mind; a very strong individual. I highly value and cherish her,” Mwaura said, breaking into a smile connoting satisfaction. 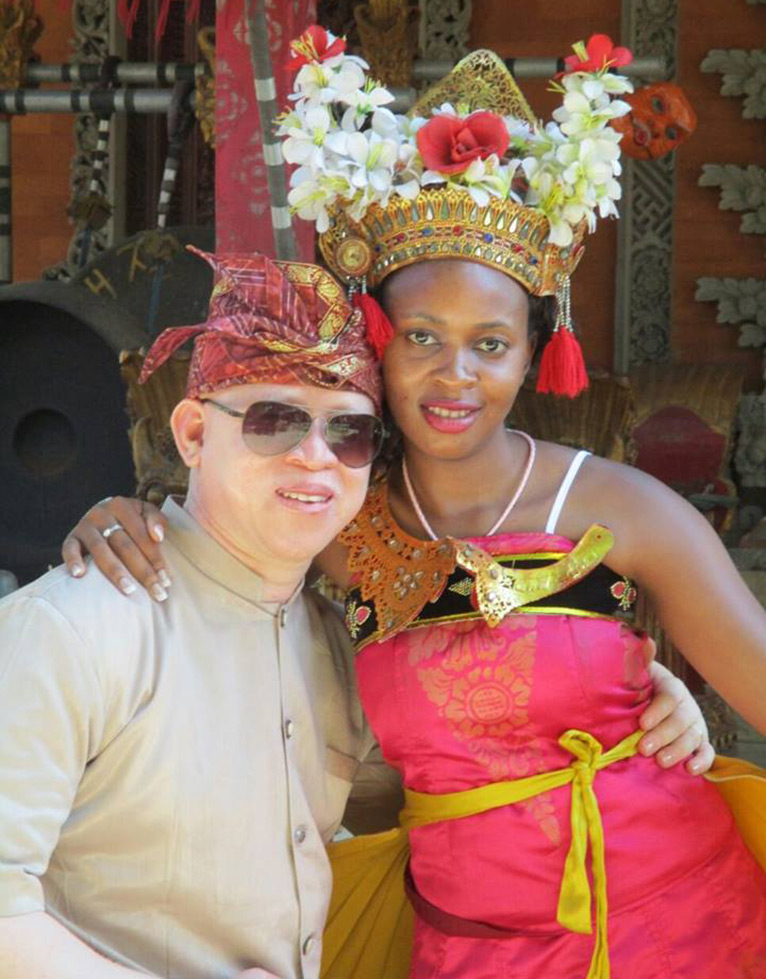 But the journey to winning Mukami’s heart was not easy – he faced inhibitors, which he finally triumphed over; thanks to Mukami’s resolute bearing.

“Some of her friends discouraged her from dating me, asking her: ‘how can you end up with someone living with albinism?’ But you know when you are the two of you, those things don’t actually matter, and Mukami does not look at me like that. She often tells me: ‘you are a man; you are responsible for whatever you do’.”

Talking of responsibility – and being a man, how does Mwaura rate himself as a husband?

“I want to believe that deep within I am a good man. I think so. A good man is one who provides, protects and leads his people to know the word of God. It is very well exemplified in the Bible; a Proverbs 31 woman is very clear. The same book says a man is known by the gates of the city. There are people who you may want to call average, but they are doing a very good job in raising their families,” said Mwaura. 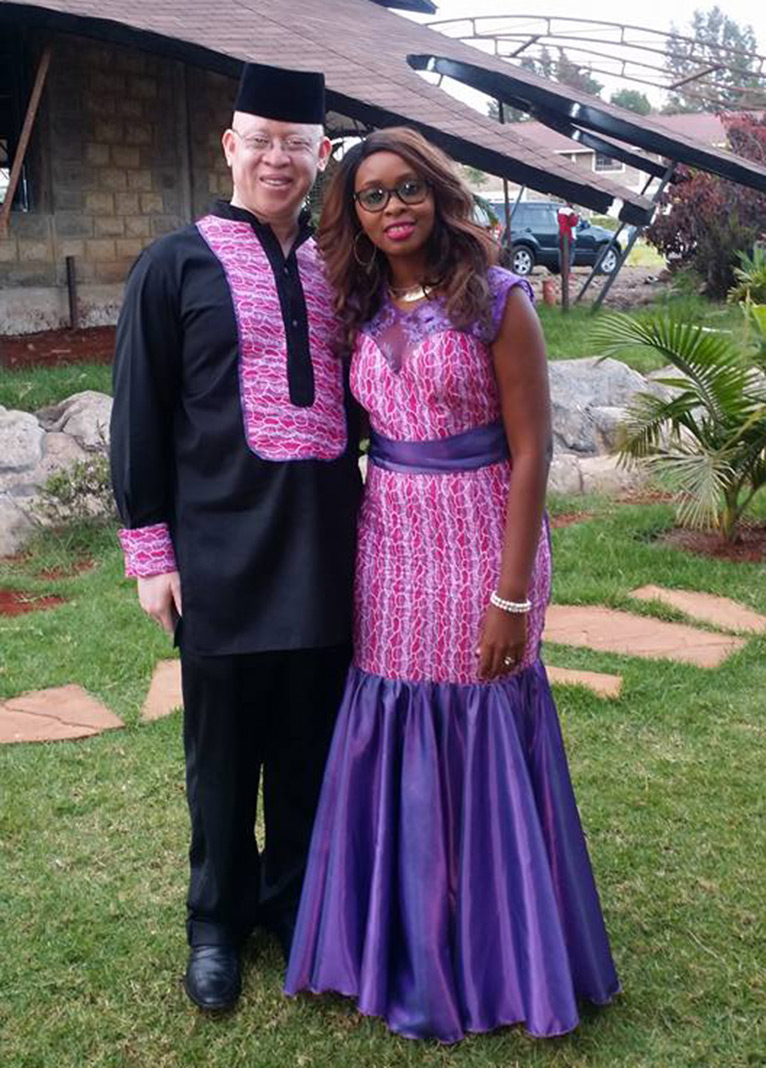 MP Mwaura’s says a good man is one who provides, protects and leads his family to live according to teachings of religion [PHOTO/COURTESY]

Mwaura said he is grateful that he settled down at a time when the institution of family continues to shrink due to increased number of youth who are opting to lead lives of singlehood.

“It is very challenging to date nowadays because there are so many options. You know in the past, people would meet at open places like a market place and strive to strike a deal to get into a relationship. Imagine a world where there were no phones; it looks inconceivable but you and I have grown up at a time when it is conceivable. Phones were introduced en masse in Kenya in the late 1990s.

“Today people meet on Facebook, WhatsApp and probably get quick gratification because of communication. Women have also learnt a lot in terms of quick love and lust. They say the moment the hunters learnt how to shoot without aiming, is when the dears came to learn to run without being caught. We are now seeing filters; when you get to know the real person you met months ago, he or she is different. Women are putting things in other places just to hoodwink us (men). And especially in this part of the world where we appreciate certain aspects of the female gender more than other civilisations. We need to be more careful so that we move away from the appearance to real character.

“I have witnessed several marriages breaking before their first anniversary; some of which Mukami and were part of as organizers or members of the bridal party. It is rather unfortunate. People are looking at what is there financially, materially – rather than the long-term goal of living together. It is a big challenge in today’s society,” said MP Mwaura.

Living with albinism exposed Mwaura to harsh reality of stigmatisation, which he now works to raise awareness against. 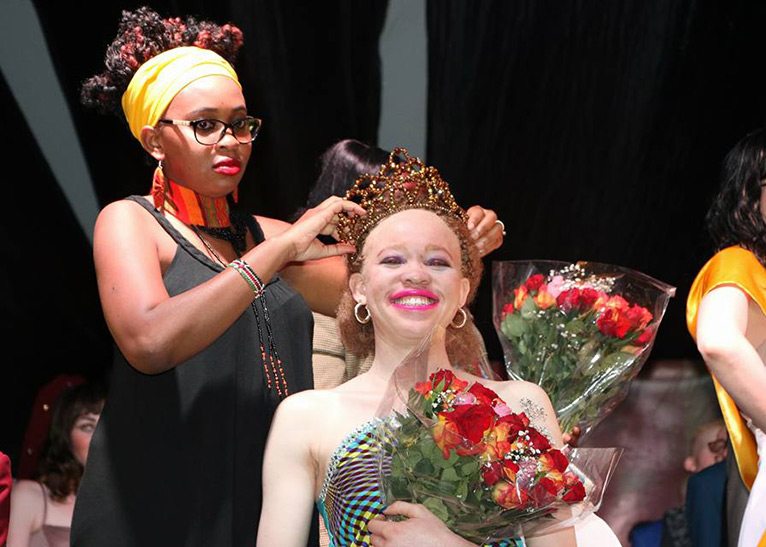 Mukami crowning Kenya’s first ever Miss Albinism in an event which was held on October 21, 2016 at the Carnivore, Nairobi. She has been supportive of her husband’s projects [PHOTO/COURTESY]

“When I went to campus, I tried to date. The friends around the woman I was interested in, tried to discourage her from being my girlfriend – it was difficult. There was another lady I tried to date and her friends would tell her that ‘you are going to have blue or yellow babies’. It was tough, yes it was tough,” acknowledged Mwaura.

“It is usually not the problem of the people you are in love with; it is a problem of the people around them; though others would not accept your proposal just like they would reject another man’s. When a woman wants to be with you and she is being discouraged by others, especially family and friends – which is very common – there’s high likelihood she would be swayed. I am glad Mukami’s family approved of me. But again, all those women who left me in the past regret their decisions. They now say: ‘I wish I was the one married to Mwaura’.

In this candid interview Mwaura narrated how his father abandoned his mother the moment he realised that Mwaura had albinism, citing he wasn’t responsible for the pregnancy.

“My dad and mum separated because of me. My father told my mum: ‘This is not a child from our side because in our lineage we have never had such kids. And that was it, (he fled)! I have never met my dad by the way. I hear about him; and that he lives in Nairobi.

“I can’t really say how I would react when I meet my dad. Perhaps it would be awkward, but as they say a parent is a parent. I wouldn’t deny the fact that someone is my father. But I have a lot of respect and regard for my mother because she did not know anything about albinism. In fact when she talks, she says she saw a beautiful, brown baby. That’s all! I honestly appreciate her and owe her a lot,” said Mwaura.

“My brother does not have albinism. He is dark as I can. I love him a lot. He now has his family,” added Mwaura.

The legislator, born and bred in Kiambu, said despite not having sight problems, he attended an institution for the physically challenged.

“I went to Thika School for the Blind from the time I was four and a half years, obviously because I was born with albinism. I was the best in KCPE in that year and there were prospects of joining Starehe Centre and School but my mother turned down the offer. So, I went to a secondary school for the blind and later Kenyatta University. I also attended Metropolitan Mandela University where I pursued a master’s degree in Development Studies and later the University of Leeds in the United Kingdom to do another master’s degree in Social and Public Policy. I have two diplomas in theology from the Presbyterian University of East Africa and another from Kenya Institute of Management.

“When I was born and I was different, my mother was advised by her first cousin who was a teacher at the Thika School for the Blind that they should not be worried about me, and she recommended I go there. I thank God for that decision. I managed to develop some sense of self-esteem. I interacted with kids from across the country. Within the vicinity where I come from, I was the first person living with albinism that people knew about,” said Mwaura.

“Growing up around teenagehood was very difficult to define myself. You see, you suffer what you call identity crisis. It was difficult. People treat you like you are a mzungu and you are not, so they will speak to you in English; so you are trying to find your way. And then role models around people living with albinism were few and far in between. When I was younger, I used to think when I grew up I would be a woman, and I would wear earrings, and I would be black because I grew up around women; my aunties, mother and grandmother. It was difficult – walking around the estate and people call you names,” recounted Mwaura.

Despite being caught in the mix of stigmatisation, many approved of him.

“There was a day our English teacher asked us to write a composition about ‘My best friend’, and half the class wrote about me. My first girlfriend had albinism. She was this pretty young girl who was a top student in her class. Later on she went to campus and got a First Class Honors. Now, she is married.” 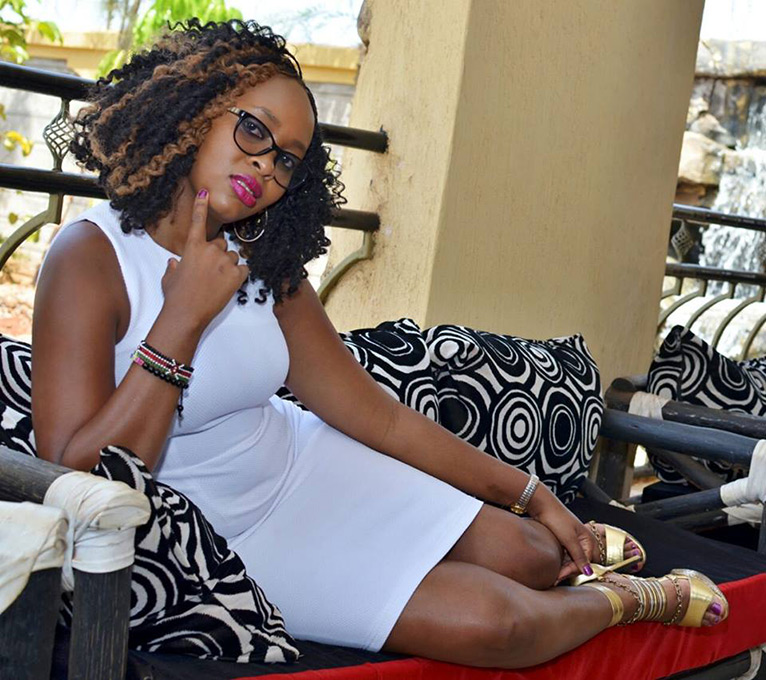 And Mwaura too is married to this beautiful woman [PHOTO/COURTESY]