Kenyan singer Jaguar has quit from his post as a director at the National Authority for the Campaign Against Alcohol and Drug Abuse (NACADA), EDAILY has learnt.

In a letter seen by EDAILY, Jaguar tendered his resignation on Tuesday, January 31 after serving as a NACADA board member for one-year-and-ten months. 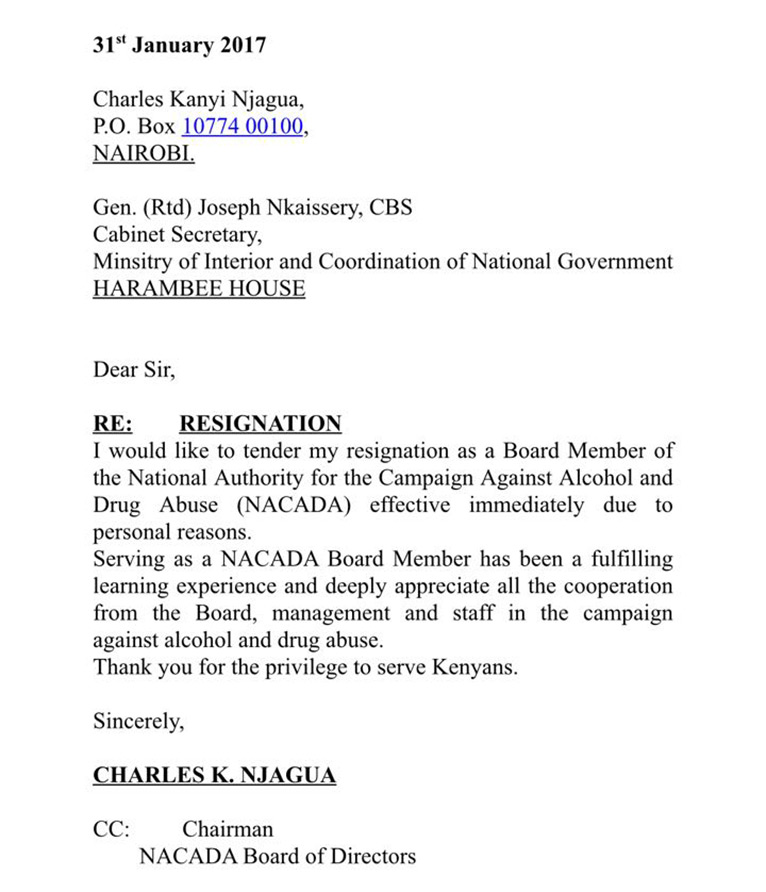 “I would like to tender my resignation as a Board Member of the National Authority for the Campaign Against Alcohol and Drug Abuse (NACADA) effective immediately due to personal reasons. Serving as a NACADA Board Member has been a fulfilling learning experience and deeply appreciate all the cooperation from the Board, management and staff in the campaign against alcohol and drug abuse. Thank you for the privilege to serve Kenyans,” he wrote.

Close sources to Jaguar have revealed that the seasoned artiste is contemplating plunging into politics after he reportedly won the approval of Nairobi Senator Mike Sonko and Nairobi gubernatorial hopeful Bishop Margaret Wanjiru to run for Starehe parliamentary seat.

Quotas claim that Jaguar stands a chance to compete against powerful incumbent Maina Kamanda for a Jubilee ticket – and probably floor him, given Jaguar’s popularity among the youth.

His closeness to President Uhuru Kenyatta and Deputy President William Ruto could also play a critical input toward the endorsement of his candidacy for Starehe MP.

An insider told EDAILY that Jaguar is contemplating to quit his other lucrative job as Water Ambassador, a position he was appointed to by the Ministry of Water and Irrigation in December 2016.

Another well-placed source says Jaguar arrived at his decision to quit top NACADA job so as to join President Uhuru Kenyatta’s campaign team ahead of August 8 general election.

EDAILY’s attempt to reach Jaguar for comment bore no fruits as his phone went unanswered.

Recently, Jaguar has been traversing parts of Nairobi, especially the slums, doing lots of charity work – fueling more word on the ground that he will run for an elective post.

EDAILY will keep you posted on the development.