22-year-old Vanessa Chettle did not know that the confines of her four-walled bathroom would one day be the very room in which she would deliver her first child.

Blood stains on the bathroom floor are a stark reminder of the life and death battle that transpired in there and life won.

The former Nairobi Dairies star says she was not sure of when the baby was coming as she was already a week overdue, however she had been experiencing frequent cramps overtime.

A seemingly normal February 12 morning turned into a day that Chettle will never forget.

She thought she was just constipating as “normal” and was in the toilet throwing up when the pain became unbearable but she still didn’t know the baby was on its way out.

“When the pains started moving to my back… as is the second stage of labor… my phone was upstairs and I was more preoccupied with finding comfortable positions to be in,” she says.

The nausea was followed by bleeding, and that’s when the baby’s head began to crown, she pushed and pushed till she finally pulled out a baby girl as fit as a fiddle.

“Between the pain and birth, time honestly flew because I was confused and not sure what was happening to my body, my inner voice kept saying to remain calm it’ll be okay,” she narrates.

“I called my dad frantically and he sent my aunties and sister to pick me up for hospital, the experience was mind blowing. I watch a lot of historical films and this is how birth was only without midwives, it was a memorable joy and shock,” she adds.

Vanessa named the baby after her late mother, Anna, who she believes was her guardian angel through the tough process. Unfortunately, Vanessa is not in good terms with the baby’s father as she did not involve him in the process but her family has been supportive.

She had planned to go back to school after giving birth but the birth process changed her decision and she has now resolved to stay home and raise baby Anna. 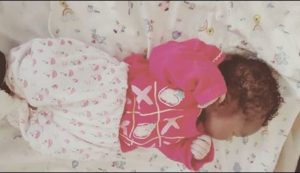 “My family was to take care of the baby while I went back to school and work but having had this experience I think I will take time to bond and raise my little one, with help of course because after all,what do I know?”

Vanessa  encourages  young mothers to keep up their good work adding that children are great blessings and “I’m proud to be in the club.”