Former street boy Patrick Hinga could have died as a result of a persistent stomach-ache, her rescuer and former schoolmate has revealed.

“…upon reaching there he called his mom and complained of a stomach-ache though not serious, he spent the night there and said he will be okay,” wrote Ms. Mwaura.

“On Saturday late night the problem persisted and that’s when he decided to go to the hospital but by the time the mother got to him early morning yesterday (Sunday), he had already passed on.”

Ms. Mwaura further added that she would let the public know about the funeral arrangements in due time. 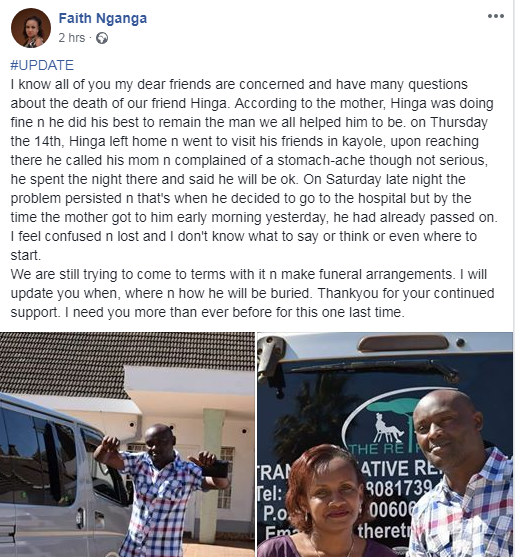 She broke the news about his death on Sunday evening saying: “With deep sorrow, I want to inform you that Hinga has rested. He passed on this morning [Sunday, March 17]. I do not have the strength to say much right now. Rest in peace, my friend.”

After being rescued from the streets in October 2017, Mr Hinga had spent eight months in a Nairobi drug rehabilitation centre, and was discharged from the facility in May 2018.

The story of Mr Hinga first hogged media headlines – both nationally and internationally – in October 2017, when pictures of Mr Hinga, a then-drug addict, and Ms Mwaura, a nurse, went viral on social media.

The pictures – deservedly – spread widely online because Ms Mwaura bumped into Mr Hinga, who was wandering on the street, and immediately took it upon herself to help him restore a social status, and true to her effort, the overcritical online community approved of her compassion.

It was early October, 2017, when Wanja Mwaura, who was on her way to the market in Lower Kabete heard someone shout out her name.

She looked up and was surprised to see a tall man with bulging eyes, a reduced frame, dirtied black overalls and an equally stained thick woolen hat, sitting on the side of the road. She did not manage to immediately establish who he was.

But when Mr Hinga introduced himself, Wanja Mwaura said shock shook her; her friend, whom she studied with in primary school in 1992, when she was 7-years-old, had turned out to be what she did not expect – a street boy, a drug addict.

Ms Wanja would, thereafter, give her contact to Mr Hinga, who promised to keep in touch.

She was his guardian angel; called her when he could – after borrowing strangers’ cell phones – and the communication pattern sooner, thereafter, became more circular.