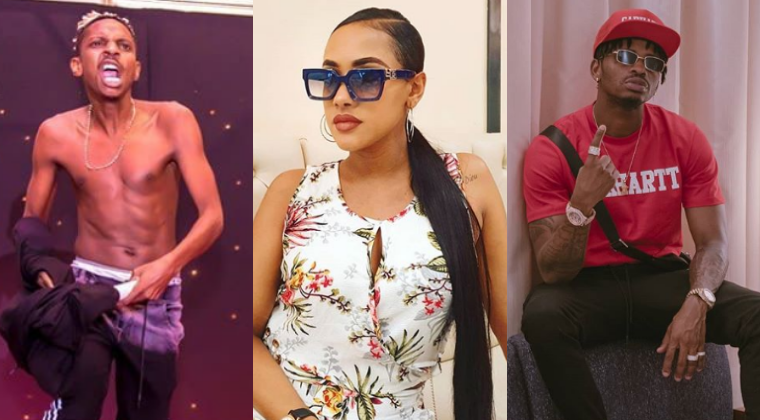 Comedian Eric Omondi has now released a new video directed at Bongo star Diamond Platnumz threatening that he will never see his girlfriend Tanasha Donna Oketch unless he warns his country’s football team not to go anywhere near the Kenyan goal post.

The video, which acts as a build-up towards Thursday nights AFCON match between Kenya and Tanzania, has cracked up many of the comedian’s social media followers.

Omondi has, on several occasions leading to the much-anticipated match, riled up Tanzanians in numerous videos featuring popular personalities such as Vera Sidika and now Tanasha.

The video opens up with Tanasha tied up and her head covered while sitting on what appears to be a stool and struggling to free herself.

The comedian then walks in in a mask, takes off the cover from Tanasha’s head and proceeds to make intimidating remarks against Diamond in an attempt to blackmail the ‘Kanyaga’ hitmaker.

[Diamond Chibu Dangote…call Taifa Stars coach and warn him…Let me not see any of your players near the Kenyan goal post…or else you will never see her (Tanasha) again.]

The Kenya Vs Tanzania match – which will be played at the 30 June Stadium – has generated a lot of pressure from both countries with either side taking to social media to discourse and predict the outcome as well as to ridicule each other.

Diamond has since posted a response to the video saying he has sent his “WCB Wasafi Gang to secure my baby.”