Born in a family of three on March 10, 1979, actor Edi Mue Gathegi has featured in more Hollywood films than any other Kenyan actor.

At the age of three, his family left Kenya and moved to the United States, settling in Albany, California. This change in environment, Gathegi says, happened because his father was going to further his studies in the U.S and what was supposed to be a brief stay became longer and longer.

He enrolled at the University of California where he tried out for the basketball team due to pressure from his peers. He injured his knee during one of the practice sessions, fell into depression and was looking for an “easy” alternative when he discovered acting fell in love with it. So he took a leap of faith, applied for a few loans and enrolled into the New York University, majored in acting at the Tisch School of Arts and has never looked back.

The star, who refers to himself as a private and introverted person, has been in Kenya on holiday for about a month, visiting long lost friends and family and trying out the local cuisine.

Edaily’s  IAN OMONDI  and  Jeff Koinange Live  (JKL) caught up with the Hollywood personality for a tête-à-tête before he leaves the country for the U.S.

He showed up in a half-buttoned beach shirt, bluish Chino pants folded at the bottom, grey boots, with his calm demeanor and warm personality strutting by his side.

Because of the cameras? I’m an entertainer, baby. I’m used to the stage. Put me in front of three thousand people and ask me again.

Where were you born?

Umoja Estate in Eastlands, Nairobi. We relocated to the States when I was three; my dad was going to study. That’s where I was raised.

How many times have you come back to Kenya since you left?

Not as many times as I would like to. I’ve been back once when I was 16 and I remember going to Uhuru Park. I intend to come as often as I possibly can though, because being back here and visiting family I haven’t seen in a long time was quite an experience for me. I’ll try to be back again in about 24 months.

Is there any one particular thing you love about here?

There are too many things that I love about Kenya to single out any one thing. But I love the soil, the food, and I love the people. 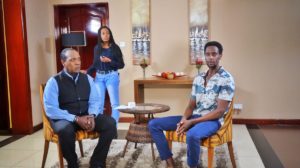 Kenyan-born Hollywood star Edi Gathegi on set with T.V Host Jeff Koinange during the interview. Behind them is JKL Producer Monica Kiragu.

You played basketball before taking up acting, do you think if you hadn’t busted up your knee and weren’t acting you would have gone on with it and maybe ended up in the NBA?

No, actually, to tell you the truth, I wasn’t really that great at basketball. I was a regular on the bench so if I hadn’t busted my knee and become the person I am today, I’d probably just have ended up as a newscaster or sportscaster or something related to sports.

Although, my passion for the longest time has been cooking so I think that is where I would have landed eventually.

Do you ever miss it? Basketball, I mean

I don’t really miss it. I had to make peace with letting go of basketball when I discovered acting and I haven’t looked back since.

Are your parents supportive of what you do?

My mum is my biggest fan. Sometimes she calls me by the characters I play on film and even calls me sometimes to recite my lines back to me.

My dad is an amazing human being because he supported me when I told him this was what I wanted to do with my life and has continued to do so.

In a 2008 interview with Vanity Fair Magazine, you said, and I quote, “New York is the only city that I have ever lived in that I have felt at home.” Why is that? What is it about New York that makes you tick?

New York was the first city that I ever lived in as an adult that moved faster than my mind.

You have acted in a lot of Hollywood films. Which character did you enjoy depicting the most? Which one came more naturally for you?

Unfortunately, Mr. Solomon was the most natural.

Who did you look up to when you were starting out in the acting field?

Tell me one black man that doesn’t look up to Denzel Washington. Denzel is the greatest actor of all time, period!

Do you meet and chat with fellow African-born actors in Hollywood, maybe during conventions and such?

I’m a private and introverted person so I don’t really go out to the Hollywood conventions as much. Because, then, that would mean that I’m not working at that particular time. And I love working.

Do people meet you and when you tell them you’re Kenyan they go like “Oh, so you and Lupita are from the same country?”

Not really. I haven’t had the pleasure of working with Lupita yet. I’m a big fan of hers, she’s a talented actress and I’d love to work with her someday. I just feel like there’s a lot of comparison going around between our Kenyan fans and I would just like to say this; we need to appreciate all our stars uniquely.

How do you unwind? Do you drink or smoke?

What I do to unwind is as simple as not being at work. Everything else is an “unwind” and that includes reading, catching up on television (when I have time), cooking and traveling. And I love sharing a good meal with good friends.

Do you know any Swahili?

When did your biggest breakthrough come?

I’ve had many breakthroughs. There was Crank; which was the first film I starred in that people really got to see. And then, of course, there were Twilight and X-Men which exposed me to a lot of people due to their fan base and enabled me to see the world.  But I believe my biggest breakthrough is yet to come.

How do you find the local food?

You know, actually, the day I landed I was served a plate of potatoes and, after tasting, I remember saying to myself, “What the hell have I been eating back in America?” Because that was how potatoes are supposed to taste like.