Drake penned an open letter to his 25 million Instagram followers saying he was overcome with emotion after watching a video of Alton Sterling getting shot by police in Louisiana on July 5.

“It’s impossible to ignore that the relationship between black and brown communities and law enforcement remains as strained as it was decade ago,” Drake wrote. “No one begins their life as a hashtag. Yet the trend of being reduced to one continues.”

Beyonce has also published an open letter on her website in the wake of the deaths of Alton Sterling and Philando Castile, both of whom were shot and killed by police officers.

“We are sick and tired of the killings of young men and women in our community,” she wrote. “It’s up to us to take a stand and demand that they ‘stop killing us.'”

Beyonce also held a moment of silence during her concert in Glasgow, Scotland while standing in front of a large screen displaying the names of individuals killed by police. 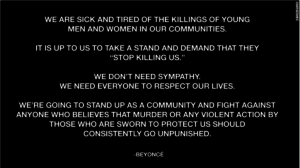 Other celebrities have also added their voice to the #BlackLivesMatter debate.

We should not have to jump through hoops to prove black people shouldn't be shot by police during routine traffic stops.

enough is enough. it's time to stand up for this. we can either sit and watch, or do something about it. the time is now. #blacklivesmatter