Just recently, hundreds of believers flocked his crusade at the Uhuru Park Grounds in Nairobi, waving white and blue flags as they welcomed the Man of God, who arrived at the venue in a convoy comprising upmarket vehicles and a contingent of bodyguards sporting black suits.

In his characteristic fully-white attire, he stepped out of a white Mercedes Benz and waved at the crowd, which at the time was making gripping screams of joy.

He hugged a few frontliners before taking to the dais, where he religiously “charged” the congregation.

Tens of people on the back row could be seen falling to the ground upon his thrum. And that symbolised God’s presence at Uhuru Park, he said.

This prophet; Man of God; who describes himself as “Servant of the Living God”… who is he? When were holy orders conferred on him?

Dr. Owuor, a chemical engineer by profession, says in 2003, God made him a prophet in the presence of Biblical greats Moses, Elijah and Daniel. He was living in Chicago at the time.

“The Lord walked into my life at that time. He immediately touched me with his left nail pierced hand. That changed my life completely. It is a long testimony. He made follow-up visitations; one of them, the Ark of the New Covenant.  Moses, Elijah and Prophet Daniel were seated on the sides of God,” he said in a past interview uploaded to a YouTube channel called ‘Time is over; Jesus is coming sooner’. The video was published on July 6, 2016.

“Then God said, now I have my four prophets here; and you [Dr. Owuor] are the fourth prophet. And my bed shook between 3am and 6am. From that day on, I started to know a lot of things that were going to happen in the future. Right now, I serve the Lord,” said Dr Owuor.

Dr. Owuor says he has foreboded key events in the world, which came to pass. These, according to him, include:  an earthquake that hit parts of Nairobi and Kisumu in December 2005, the May, 2004 Asian Tsunami, among others. 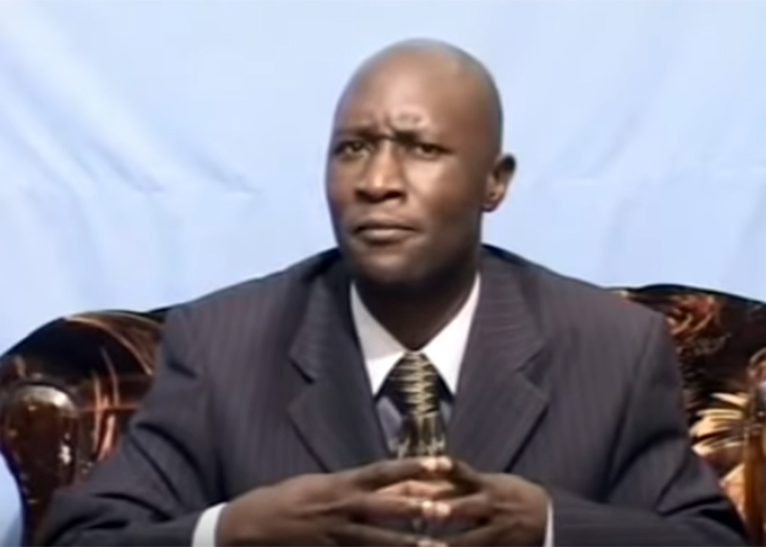 Dr. Owuor recounting how he was ordained shortly after returning to Kenya in 2004. [PHOTO | COURTESY]

Dr. Owuor, who has many education accolades, including a PhD, is Israeli-educated.

“I left this country [Kenya], went to Israel to pursue my doctorate degree there. When I finished, I was looking into issues of gene therapy, DNA technology and advanced molecular Science. This kind of Science is used in drug design and drug discovery,” he said the ‘Time is over Jesus is coming sooner’ interview.

“I, thereafter, went to work in United States of America, where I was teaching in medical schools. I gave my life at that time to cancer research; to find the cure for cancer. I was doing a lot of work in signal transduction, finding new drugs for cancer. I was finding a way of reducing toxicity,” he narrated.

“After that, I switched to the Cancer Institute of New Jersey, where I did a lot of work in surgical oncology. I became a specialist; a reference point for different surgeons specialising in breast and melanoma issues.

“After that, I went into aviation, or aerospace, medicine; I was interested in knowing what happens when a pilot takes medicine on earth and goes into the cockpit of a plane, which has 400-plus lives on board. And the medicine, which was prescribed to him on earth, was based on blood-flow pattern, but when a pilot is several feet into the air, the blood-flow pattern changes. I wanted to know how to make it safer for people on medication to fly,” he said.

Dr. Owuor is the second born in a family of six girls and three boys.

His father, Helekia Owuor, was a civil servant who worked with the East African Community Prison Service and rose within the ranks to be a Sergeant Major, website that profiles prominent personalities, Softkenya, documents.

His mother, the late Margaret Achieng’-Owuor, was a housewife and a peasant farmer.

Dr. Owuor went to Wambasa Primary School in Yimbo and to various other primary schools including Jusa, Luzira and Kitalya in Uganda, where his father had been transferred while working for the now-defunct East Africa Community.

He joined Mbale Senior Secondary School while still in Uganda, where he sat for his ‘O’ level exams, before proceeding to St. Peters College in Tororo for his ‘A’ levels.

Prophet Owuor later joined Makerere University for a Bachelor of Science degree, but later moved to University of Nairobi, where he was to complete his first degree in 1988.

In 1992, he joined Ben Gurion University of the Negev in Israel for his Master’s programme.

He earned his first degree from Makerere University, his second at University of Nairobi, and his Master’s degree in Genetics (Inheritance) at Ben Gurion, Israel before proceeding for his PhD in Molecular Genetics at University of Haifa (also in Israel).

He also holds a degree from the University of Giessen’s Institute for Genetics (Germany).

Dr. Owuor is, undeniably, one of the wealthiest preachers in Kenya, given his flashy display. His net worth and source of wealth, however, remain unknown.