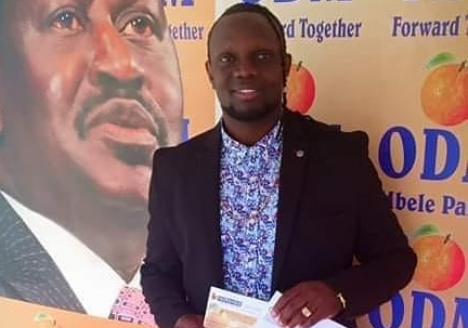 Popular Kenyan Reggae DJ Kriss Darlin, who was recently captured on video kneeling before Raila Odinga, has spoken out on what he will do going forward if the Orange Democratic Movement (ODM) party leader endorses another candidate for the Kibra MP race.

The DJ, real name Chris Odhiambo, spoke on Hot 96 radio on Tuesday morning during an interview where he also opened up on the reason why he went on his knees before the veteran politician; an action that has since drawn mixed reactions from Kenyans online.

The TV host stated that he was only seeking Raila’s blessings, adding that should he (Raila) then choose to endorse another candidate instead then he will abandon his quest for the seat and fully back that person.

“I went down seeking for his blessings, so going against him again is going to be very bad and disrespectful. If someone (else) wins (ODM nominations), I’ll come out and support that person, as long as he has the capability to lead the Kibra people,” said Kriss.

He also expressed hope that the ODM nominations set for Saturday August 31 will be free and fair as party boss Raila promised during a Sunday rally.

The Dohty Family chief further stated that his act of kneeling before Raila was influenced by his upbringing.

“Baba (Raila Odinga) is not God, but he is somebody that deserves respect…he’s a fatherly figure to me, he’s an elder, I respect him. And when I want to address elderly people…how I was born and bred, even my late father I used to talk to him on my knees.,” he said.

“When I talk to my mum, I’ll go down on my knees and say ‘Mum, I want to do this and this….give me your blessings.’ So what I was asking for are blessings, it’s not that he’s God, No! Even when you’re proposing, you go down on your knees, does it mean that your partner is God? No! The internet, as usual, got it wrong, but it’s cool.”

DJ Kriss Darlin also stated that he is the best fit to take over from where the late area Member or Parliament Ken Okoth, who succumbed to Cancer on July 26, left because he was brought up in the slum and hence resonates with the people’s struggles and needs.

He also listed a few projects he has been involved in within Kibra saying: “I have children that I pay school fees for, I have bailed people out of jail, I supply sanitary towels in schools, I give boxers to boys in schools, I have football tournaments that bring the residents together, I nurture talent. There is so much I do in Kibra that people do not know of.”