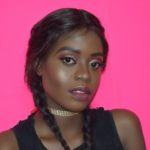 A Beauty and makeup vlogger claims to have been drugged and harassed as she boarded a Taxify cab on her way home.

Naomy Matinde claims that she got drugged in the cab and had to get out of the moving car right on the highway.

She further claims, on her Facebook page, that the driver of the cab is one Evans Kamau and that she had been admitted at the Nairobi Hospital after the harrowing ordeal.

But a call that Edaily made to Taxify revealed a different story ; Taxify absolves their driver from any wrongdoing after Naomy failed to back up her claims with proper Police reports.

Also, Naomy did not produce any official documents to show that she did indeed undergo drug tests at the Hospital.

After a brief interdiction, Taxify reinstated their driver who had not been accused of any crimes in the past and has not drugged or wronged any client after.

Also, People have questioned the authenticity of her claims and are claiming that she is lying to get a couple clicks and attract followers to her page.

Naomy, who shares beauty tips on her social media pages , has however not addressed the claims of falsifying the incident even as many people on Facebook find her story rather fake and odd.

Did Kenyan beauty vlogger lie about drugging incident in taxi?