Drama and destruction characterised the wedding ceremony of one Dennis Kinyanjui and his partner Agnes Wangari, who are Nakuru residents, on Saturday after Kinyanjui’s alleged lover, Agnes Wanjiru, stormed the function in a bid to scuttle it.

The wedding ceremony was being held at the ACK Jehovah Shammah Church in Pipeline area, Nakuru County.

Wanjiru, 21, claims that she has been cohabiting with Mr Kinyanjui for three years, and she is currently six months expectant with his baby.

Wanjiru was accompanied to the church by her mother Lucy Wanjiku. 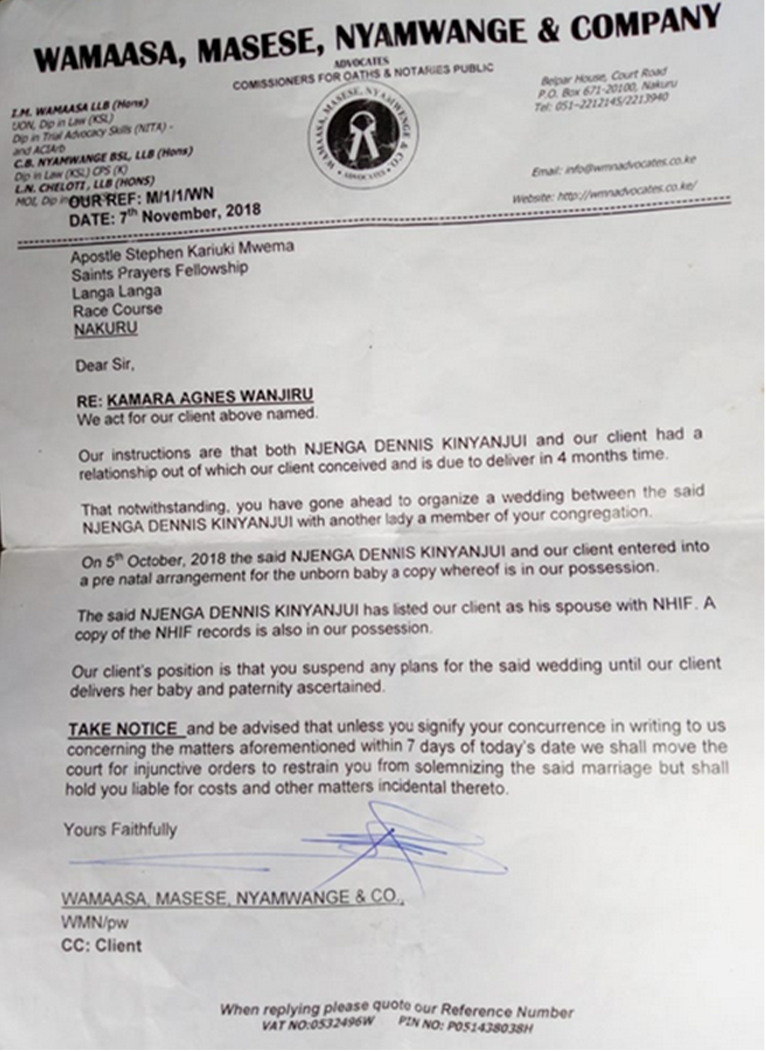 Wanjiru’s letter to Bishop Kariuki urging him not to officiate Kinyanjui and Wangari’s wedding. [PHOTO | EDAILY]

“We act for our client [Kamara Agnes Wanjiru]. Our instructions are that both Njenga Dennis Kinyanjui and our client [Wanjiru] had a relationship out of which, our client conceived and is due to deliver in [about] 4 months time. That notwithstanding, you have gone ahead to organize a wedding with another lady [who is] a member of your congregation,” reads a part of the letter directed to Bishop Stephen Kariuki.

“On October 5, 2018 the said Dennis Kinyanjui entered into a prenatal agreement for the unborn baby; a copy whereof is in our possession.

“The said Kinyanjui has listed our client as his spouse with the NHIF. Our client’s position is that you suspend any plans of the said wedding until our client delivers her baby and paternity ascertained,” read the letter.

The groom is also accused of secretly seeing two other women besides Wangari and Wanjiru.

During the chaos, the church’s window panes were shattered as Wanjiru’s backers tried to forcefully gain access to the wedding venue.

Two policemen, who had been hired to man the wedding venue, watched helplessly as the chaos reigned.

The wedding, which was being officiated by another preacher, identified as Kimani, had to be rushed.

Kinyanjui had in October this year committed to take care of Wanjiru’s baby should the paternity tests prove that he was responsible for her pregnancy.

Kinyanjui, however, said if the DNA tests would come out positive, he would only take care of his child.

“I Dennis Kinyanjui have decided to wait for DNA tests to prove if Agnes Wanjiru’s unborn child is indeed mine. If the results come out positive, I will pay for the expenses that his or her mother would incur. If the DNA results would turn out negative, then Wanjiru will refund me the resources I would have invested in her. I am the one who will foot the DNA test costs,” said Kinyanjui in a letter signed by him.

Efforts to get a comment from Kinyanjui, his bride, Wangari, or family members bore no fruits as they left the church hurriedly in three vehicles Saturday morning.