The star took to SnapChat to announce the news, posting, “On the 27 of December, me and my team made half a billi! Facts!!” 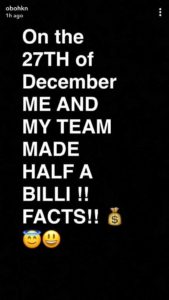 Perhaps a fan favorite of the concert was when Davido brought out his long-time frenemy Wizkid on stage and they performed together. This followed a similar act by the ‘Ojuelegba’ star when he brought out the ‘If’ hitmaker and shared the same platform with him during his ‘Wizkid: The Concert’ show. 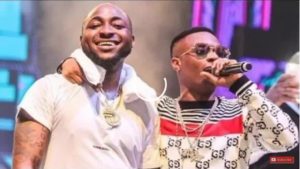 Davido and Wizkid during the #30BillionConcert.

Davido, who is currently riding high with his ‘Fia’ wave, has now began the year on a high note by rewarding himself for all the effort he put into his music in 2017.

Taking to Instagram, the singer posted a photo of the latest machine to his collection; a sleek brand new 2018 Bentley believed to have cost the star a fortune.

“God you have been too good to me,” posted Davido beside a picture of the Bentley.

In a series of never ending wins for the singer, he also recently shared the teaser to a new Nollywood film in which he stars.

In the film, titled ‘Legend at 60,’ Davido plays the role of a wealthy highly-skilled commercial pilot.