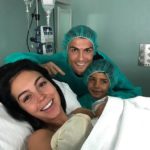 Cristiano Ronaldo is a dad again.

“Alana Martina was just born! Both Geo and Alana are doing great! We are all very happy!” he posted on Instagram, alongside a photo of him and 7-year-old son Cristiano Ronaldo Jr appearing beside Georgina and the baby on a hospital bed.

The Real Madrid star and the model had announced their daughter’s name in late October during an Instagram Live session. The soccer star and Georgina have been dating for more than a year.

“The name of my daughter will be Alana Martina. I just wanted to share this with you. I think it is a beautiful name.”

Ronaldo spoke last week about what being a father meant to him.

“Being a father is a unique and personal journey, something that has changed me completely,” he said before launching his new CR7 Junior Collection clothing line.

“It’s taught me things about love that I never knew existed.

“It has softened me and given me a different perspective on what is really important in my life.

Her pregnancy was made public in July, a month after he confirmed the arrival of his twin son and daughter, reportedly named Mateo and Eva, who were born via surrogate.

The athlete has never revealed the identity of his eldest child’s mother.