On Tuesday, November 20 at exactly 5:30pm, I managed to talk to hospitalised veteran boxer Conjestina Achieng – courtesy of Hashim Kamau, who is a member of Nairobi County Sports Management Board.

Mr Kamau, through the sports board, has been tasked by Nairobi Governor Mike Sonko to look into the welfare of Ms Achieng throughout her one-year rehabilitation journey in the capital city.

At first, I was worried that Ms Achieng’ might not be in the right sense of mind – and peace – to talk to me; and I needed assurance (from Hashim and a doc.) that the conversation was going to be healthy – and very healthy it was!

“Hallo, how are you,” Ms Achieng responded, setting ground for a conversation that would go down in my history as one of the heartiest phone banters I have ever had.

“I am well, Conje. Unaendelea aje?” I inquire.

I stop for a moment and marvel at how the ex-boxer recognises God’s role in her wellbeing.

My silence, by now, has captured her attention.

I lack an immediate response and mumble one or two words to her.

She, thereafter, tells me that her journey at the rehabilitation centre, thus far, is “great”.

“Nina matumaini kuwa afya yangu itaimarika, and I will get back to serving the community,” she said.

At this point, gobsmacked, I was – very happy that a woman, I once interacted with face-to-face; and was looking hopeless and dejected, was on the path to full recovery. Her diction, well thought-out; and her sense of mind, impressive! 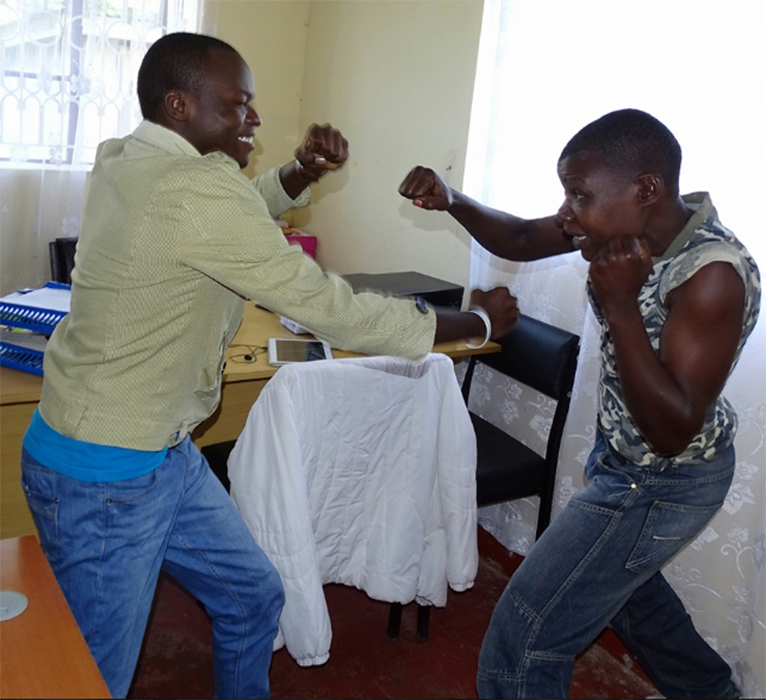 A picture I took with Conjestina Achieng in December 2015, when I visited her at the Foundation of Hope Rehabilitation Centre in Kisumu. [PHOTO | BRIAN OKOTH]

“Niko tu sawa, niko na Hashim hapa. I had asked him to bring me pizza, but he hasn’t. I am craving for pizza,” she tells me.

I wished I could deliver a whole box of large pizza to her at that very moment, but I couldn’t.

I, thereafter, tell her: “Kindly pass the phone to Hashim nimuulize kwa nini hajakuletea pizza”, to which she obliged.

Hashim tells me that the ex-boxer’s diet is, to a great extent, controlled by the medics at the rehab centre, and that was why he couldn’t grant her that wish.

Hashim, thereafter, hands the phone back to Conjestina.

I bid her bye, promising to visit her soon, and carry with me a box of pizza to the hospital.

“Wow, she is recovering,” I quietly rejoice at that progress, look at my phone log; and realise the call lasted a few seconds below 5 minutes.

Conjestina Achieng’ was admitted to rehab on November 2, 2018 after her plight was highlighted on social media.

Earlier Tuesday, NACADA Board member Vincent Muasya, alias Chipukeezy, had told me that Ms Achieng’ was responding well to treatment, and I took it upon myself to confirm.

“She is in a good rehabilitation centre, which has been inspected several times and accredited by the National Authority For The Campaign Against Alcohol And Drug Abuse (NACADA).

“A multidisciplinary team is offering her quality and comprehensive care. I would say she is responding well to treatment, though she has a long way to go. According to the doctors attending to her, Conjestina’s current condition is attributed to mental instability. She is, however, showing every sign of improving. The ex-boxer is enrolled to the facility for one year,” Chipukeezy told me on phone at 1:26pm Tuesday.

Conjestina was, in the past, admitted to several rehab centres, including Mathari Mental Hospital and the Foundation of Hope Rehabilitation Centre in Kisumu, where she did not fully recover.

According to Dr. Javan Ochieng’, who attended to her at the Foundation of Hope Rehabilitation Centre – between January, 2016 and May, 2016 – Conjestina received treatment for clinical depression and marijuana dependency.

I wish you quick recovery, my friend Achieng’, Achie as I fondly call you.