The support for Demi Lovato has been unwavering since her apparent overdose and now that she has spoken out even more people are rallying around her.

The singer released a statement Sunday posted on her Instagram account thanking God, her family, team, fans and the staff at Cedars-Sinai Medical Center in Los Angeles for being there for her since she was rushed to the hospital on July 24. 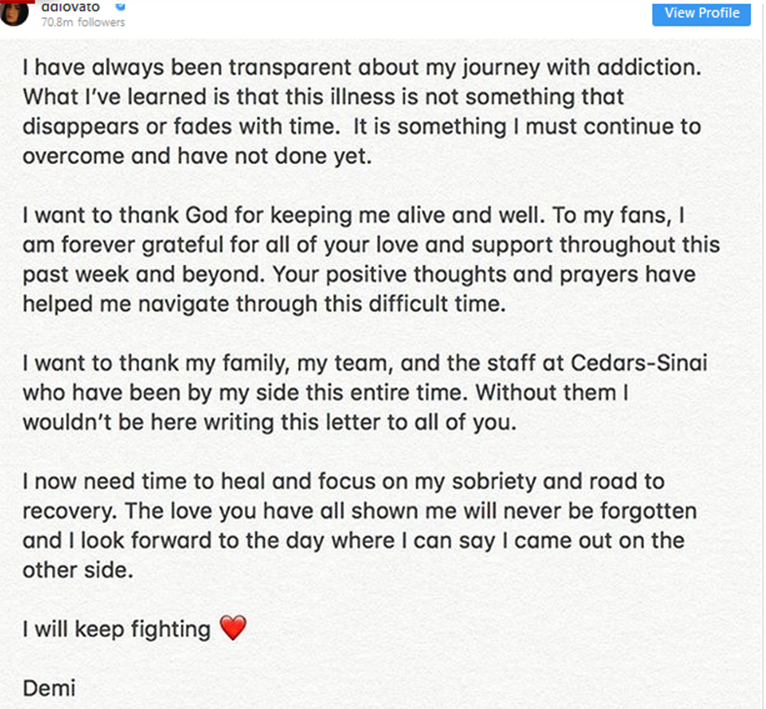 “I now need time to heal and focus on my sobriety and road to recovery,” she wrote. “I will keep fighting.”

Several celebs commented on the posting.

“Love you so much sis,” socialite/reality star Paris Hilton wrote.

Superstar Jennifer Lopez wrote “Oh baby…sending you love,” while rapper Macklemore weighed in with his own personal story of struggles with sobriety.

“Sending love Demi. I’ve relapsed many times,” he wrote. “The recovery community has always welcomed me back with infinite love and support. Always here for you. One day at a time.”

Two sources close to Lovato have told CNN that her family and her former boyfriend, Wilmer Valderrama, have been by her side during her hospitalization.

Sources also told CNN that Lovato had been experiencing complications, including “nausea, vomiting and a high fever,” and is expected to seek drug rehabilitation treatment following her hospitalization.