The management of Carrefour Kenya, Karen branch has pledged to train its staff on customer relations after a Kenyan woman was allegedly racially abused by a white woman, who was shopping in the same facility last weekend.

“Carrefour’s management has investigated the incident (where a Kenyan customer was allegedly looked down upon based on her race) and has already taken proper actions to address the situation. We will continue to train current and new team members in handling potential incidents in our store,” wrote the retailer’s management in a press statement dated October 3.

“We extend our apologies to all customers who were inconvenienced by this incident and assure you that Carrefour will always stand for fair and equal treatment for all our customers, irrespective of race, gender and social class.” 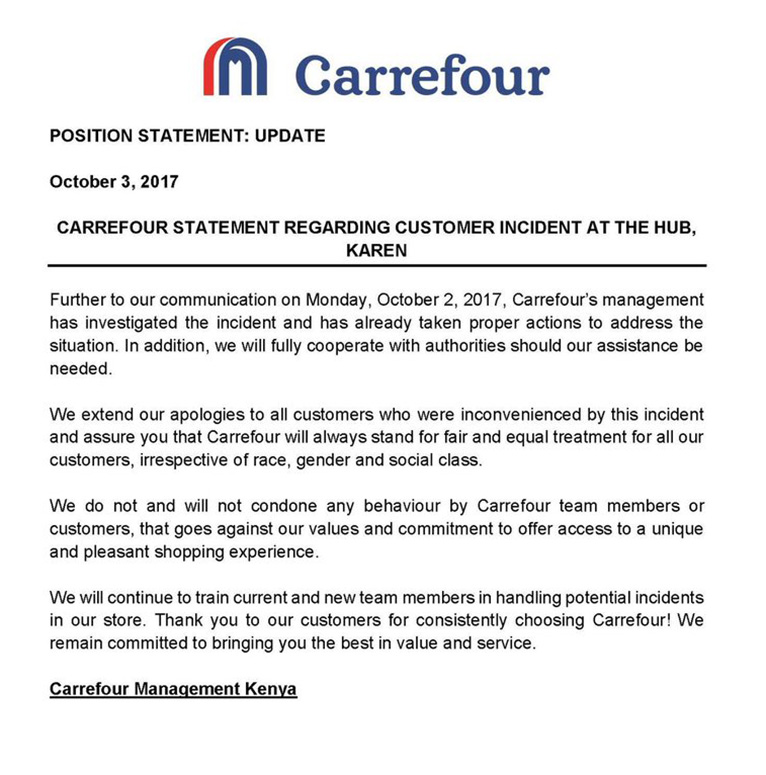 The alleged racial abuse incident occurred on Saturday, September 30 when a shopper, identified as Belinda, otherwise known as Wangu Wa Muendo on social media, went for shopping at the retailer’s Karen branch.

In a chronological sequence, Belinda narrated, on social media, what transpired. She wrote: “To the management of Carrefour Kenya, Karen Branch. Good Evening. I’m disappointed today.

“I came in at about 6pm to find the place brimming with activity. People from all walks of life were shopping and walking and talking.

“Being a weekend, the little trolleys are the first to go. I was coming for yoghurt, dhania and bread. I pulled a large trolley because I cannot carry these few items in my hands. I picked up my items and wheeled my trolley to the 10 items or less POS.

“I got into queue like a civilized individual. This beautiful white woman comes from around the corner and comes to stand at the front of the queue. An elderly black man was next in line and seeing she has two little girls with her, he does the gentlemanly thing and lets her pass.

“She proceeds to explain to all that, we lazy Africans are the reason why we aren’t progressing in life. The elderly gentlemen proceeds to the next counter.

“The time comes for the beautiful white woman to pay for her items and leave. I take this opportunity to start placing my Yoghurt, dhania and bread on the counter.

“She puts her arm across my chest and pushes me aside and tells me to wait until she is out of the supermarket.

“I duly ignore her as I think she looks like she has issues of her own. She picks up my bread and some of the yoghurts and proceeds to throw them on the floor.

“At this point, all the black people in the queue are now requesting for the manager to show up.

“I request the teller to get hold of a manager. He calls someone but no one picked his calls.

“A security guard showed up. He started to try to tell us to stop shouting at the beautiful white woman. The teller was there to correct that ideology immediately. He heard the story and left.

“This beautiful white lady proceeded to tell all of us in the queue that we are lazy Africans and we don’t deserve our country.

“She paid off her bill and left.

“No one came to calm down the customers or correct her behavior. You have a large sign that reads the fact that you deserve the right to deny service.

“I didn’t collect the items she threw on the floor. Goodnight.”