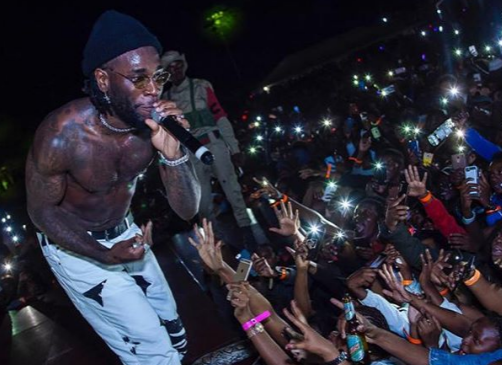 Nigerian artist Damini Ogulu, popularly known as Burna Boy, has now been forced to apologise after a video of him kicking a fan during a performance went viral.

The ‘On The Low’ hitmaker was performing at a concert in Lusaka, Zambia, for his ‘African Giant’ tour when the incident occurred.

In the video, an unidentified person is seen holding onto one of Burna Boy’s fingers for a few singers before he visibly gets agitated and kicks him/her then walks away.

#BurnaBoy kicks fan who was trying to steal his ring pic.twitter.com/hBBLvGEG7y

The artist, however, in response to the backlash on social media following heavy spread of the video, now says the fan was trying to rob him.

Replying to a Twitter user who posted about the incident, the singer wrote:

“I am sorry about how it looks but this person continuous(ly) tried to rob me on stage. It was like the 10th attempt to do it after telling him several times to stop. This wasn’t a fan. Apologies for how it looks but it’s not the case at all. I appreciate all my fans.” 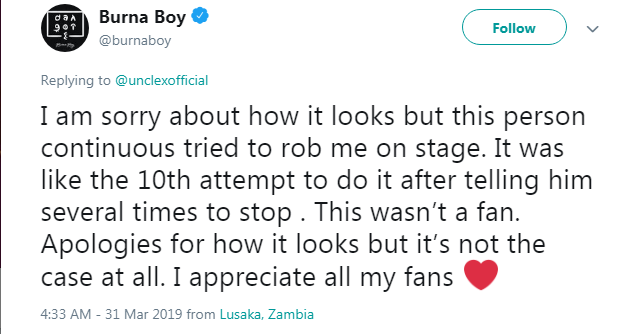 The video has, however, elicited mixed reactions on social media with a section of Twitter users criticising the artist’s behavior and calling on Zambian music lovers, through the hashtag #MuteBurna, to stop playing his songs.

Regardless of what was going on here, nothing justifies Burna boy's irrational kicking of a fan. He could have handled it better. #Zambia must #muteBurna until he apologies #iStandwithZaambia #naija pic.twitter.com/rAr5bXlUuW

Why go and hold the exact same fan that tried to rob you 9 times before? NINE TIMES and you go in for the 10th???? That doesn't make any sense. You need to own up and not make lame excuses. #muteBurna

This is wrong on from every angle Burna boy must apologize #muteBurna pic.twitter.com/rPZI5X5CUQ

Burna Boy must own up for doing this to us after paying him #ZedTwitter #Zambia #muteBurna #naija https://t.co/tXRKJtcILw