They say Hell hath no fury like a Woman scorned, and if that woman is Betty Kyalo, the Empress of Pettiness, then you need to lace up your boots ‘cos the ride is about to be too rough and bumpy.

Early this year, the Internet was almost broken with the sordid tales of the dramatic breakdown of the relationship between Betty Kyalo and her model BFF Susan Kaitanny.

Later, it was revealed that Betty had broken away from her best friend after a business and personal deal gone sour.

Betty Kyalo and Susan Kaitanny during the better days

Actually, things happened fast. So fast that within days, Betty had announced the termination of her relationship with Posh Palace, their joint venture which was a luxurious Beauty Spa ensconced in the lush Kilimani suburbs.

Lawyers were even thrown into the fray – for good measure.

Less than three months later, Betty Kyalo is back to claim what was rightfully hers. And to dominate the beauty and hair market again in the same upscale Kilimani address.

Betty has now announced the opening of her own deluxe Beauty Salon. On Instagram, the pretty TV star has said that the official launch of her OWN Beauty Salon will happen this Saturday. And to back it up, she has splashed photos of the Salon’s new residence in the most gaudy and outlandish way.

And here’s the catch – Betty’s new salon, Flair by Betty, will be located RIGHT OPPOSITE Susan Kaitanny’s Posh Place. Yes, take that and stick it up your… never mind.

It will be housed at the glamorous FCB Mihrab building, along Lenana Road and at the Mezzanine Floor.

Not to be outdone, Susan has also decided to amplify her thunder and has taken up advertising space right outside Betty’s new Salon to hype up her Posh Palace salon which she says is about to be bigger, better, stacked with the best hair stylists in town and offer the trendiest services. 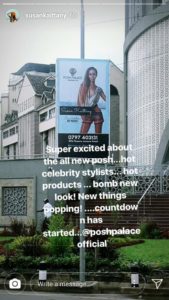 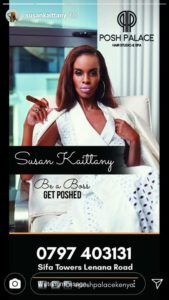 This whole fight for dominance is playing out right in the streets of Kilimani … As the friends, fans and clients of both women watch.

This dicey battle for supremacy, between two beautiful media girls who were once BFFs, and who fell out acrimoniously, is playing out like a perfectly-scripted Filipino Soap Opera.

Who will blink first? Keep it eDaily for the second season of the hit show La Pelea de las Divas.