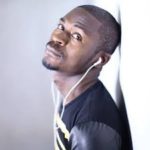 Benson Ongachi popularly known as Benachi has been admitted in hospital at the Unites States.

The Mwanake artist took to his Instagram to ask fans for their prayers with a photo of him lying in a hospital bed.

“I just got admitted at the hospital. Please pray for me”, he wrote.

Benachi came to fame in the Kenyan gospel industry after releasing his ‘Mwanake’ collabo with the late Kaberere, who was his spiritual mentor.

Benachi has been living in the United States with his family and wife Joan, who he married last year December 17.