Kiambu Governor Ferdinand Waititu left online users in stitches on Tuesday, December 11, when he launched a Christmas tree at his office in Kiambu.

A picture of Mr Waititu donning a synthetic white beard and headgear in a bid to resemble legendary Christmas season figure, Santa Claus, had the Internet users questioning who advised the county chief.

The synthetic beard – in a rather amusing look – completely covers his mouth and misses the base of his nose by just a few millimeters. That space, online users joked, was left for him to breathe.

Mr Waititu sported a checked coat, a navy blue pair of official trousers, a light blue shirt and a red necktie – a combination, which many online users said was colour-clashing in a legendary fashion.

Away from that, the governor launched a Christmas tree ahead of the holiday celebrated on December 25. 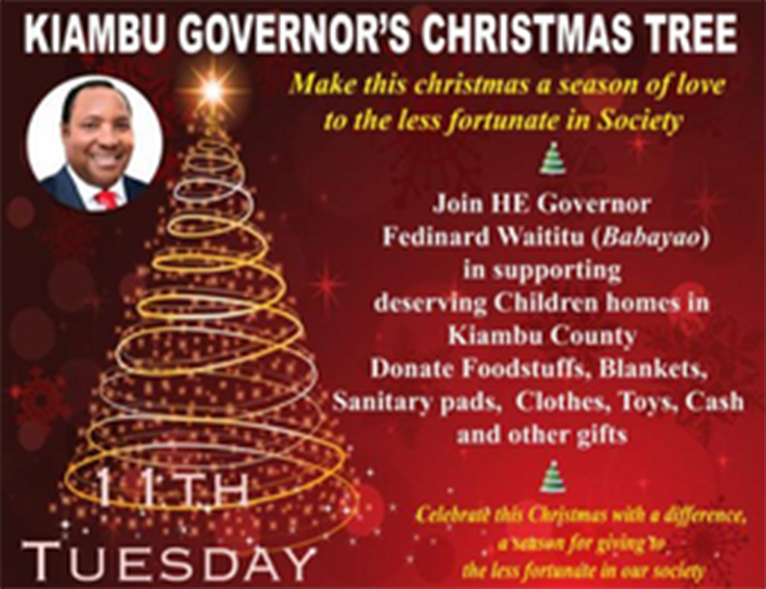 A good message on the card, but what stood out for people, who came across Mr Waititu’s picture, was his look.

Shyko Joan said: “[My Kiambu relatives], can you stop telling people where I come from [because I am embarrassed].”

Santa Claus is a legendary figure originating in Western Christian culture who is said to bring gifts to the homes of well-behaved children on Christmas Eve and the early morning hours of Christmas Day.