Kenyan singer Avril Nyambura’s HIV test result is negative, and expectedly she is happy about it.

Read Also: DP Ruto laughs at opposition leader who was “beaten by wife”

The singer early this week took to Instagram to share the news with her followers – and a caption to a photo showing three test kits that confirmed her HIV-free status, did not impress quite a number of Instagrammers. 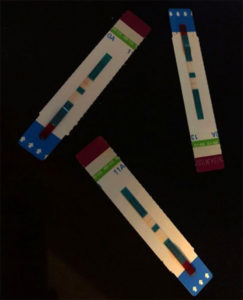 A caption to a photo showing three test kits that confirmed Avril’s HIV-free status, did not impress quite a number of Instagrammers PHOTO/INSTAGRAM

Right away some followers took issue with the “all clean” hash tag.

“Avril, do you imply that all the other people who are (HIV) positive are #alldirty? Now I know where the stigma really comes from,” said Johnson Birgen.

Mr Birgen’s sentiments were echoed by Carol Lynnar who said: “The hash tag is definitely offensive to people living with HIV.”

However, not all online users found Avril’s update to be distasteful.

Namwene Mukabwa answering Mr Birgen, said: “Johnson Birgen it is not that serious, you over-think. Being clean is a medical and often criminal register meaning ‘not associated’. In this case, with the virus…It is not the opposite of dirty in the context. Language is actually contextual, more connotative than denotative! Take it easy, bro.”

Sobux Soldier noted Avril was only excited about her HIV status – and not that she was disrespecting people living with HIV.

“When somebody celebrates winning a race it doesn’t mean he’s laughing at those who didn’t win. Same to this case, she is happy her blood is clean. I don’t see any stigmatisation. Uninfected blood is referred to as clean blood. Huyo mseh asikuletee feelings (That guy [Mr Birgen] should not be offended by your update).