Nominated MP Isaac Mwaura was on Thursday, January 5 referred to as the “Prime Minister” by an American journal Endocrinology Advisor – specifically, the Prime Minister of the intersex people in Kenya.

Endocrinology Advisor is an online resource – owned by Haymarket Media Group, which has its headquarters in New York.

The journal provides health care professionals with comprehensive information on important principles of care in endocrinology as well as up-to-date clinical news on the diagnosis and treatment of endocrine conditions.

The reference has been christened “interesting” by MP Mwaura, who took to his Facebook page on Friday to inform his followers about the recognition. 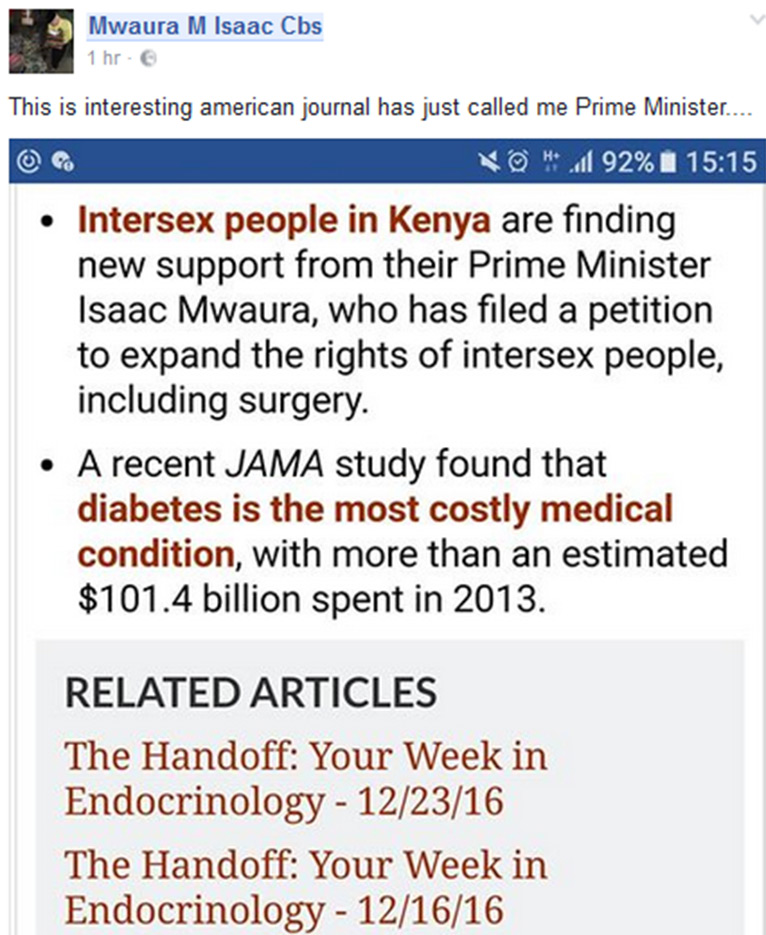 “This is interesting. (An) American journal has just called me Prime Minister…,” wrote the ostensibly excited legislator.

“Intersex people in Kenya are finding new support from their Prime Minister Isaac Mwaura, who has filed a petition to expand the rights of intersex people, including surgery,” reads a paragraph of the journal’s article titled The Handoff: Your Week in Endocrinology – 1/6/17.

According to Oxford Dictionary a Prime Minister is the head of an elected government; the principal minister of a sovereign or state – a definition echoed by the Collins Dictionary and the Cambridge Dictionary.

However, in the context of the Endocrinology Advisor article, the term Prime Minister connotes a person who plays an important role in advocating for the rights of a group of people, especially those who may need shielding against harassment.

The term intersex is used for a variety of conditions in which a person is born with a reproductive or sexual anatomy that doesn’t seem to fit the typical conditions of female or male.

Last year October, MP Mwaura asked Parliament to pass a law to recognise a third gender to end discrimination against those who identify as intersex.

Kenya is a largely conservative country where issues of gender identity and sexual orientation are rarely spoken about publicly.

However, in 2014, High Court broke with tradition by ruling in favour of a transsexual woman who had sued the education authorities for refusing to amend her certificates to reflect her new gender and name.

The complainant’s name was thus changed from Andrew Mbugua to Audrey Mbugua.