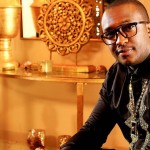 The Young entrepreneur checked in to the Yas Viceroy Hotel ahead of the Rich List experience for the Formula one this past weekend.

Other celebrities that were in the Rich list include Lewis Hamilton, Kim Kardashian, Tyga, French Montana, Akon and Nelly.

He posted pictures and videos of the past weekend’s events in and out of the yacht, including pictures with Akon.

Early November he spent a whooping Ksh10 million in a three-day celebration of his 28th birthday, exclusively revealed by Citizen Digital.

The International commodities trading company, specializing in freight forwarding, has operations in 4 continents with offices in over 73 countries.

He  owns the Della Wine Estate and took part in the development of the renowned Mimosa Golf Club and that is not all, he owns twelve four star hotels across the country, thirty two apartment blocks in Nairobi, two insurance companies in Uganda, six night clubs in Nakuru, Kisumu and Nairobi, a flight training academy in Wilson Airport.

Additionally, he jointly owns and manages two law firms and three stock brokerage companies at the Nairobi Securities exchange, serves as the Non-executive chair of Fly 540 Airways and Youth Aviation Company Kenya; he had served as Board chairman at Faulu Bank.

Mbogo is eyeing the presidential seat under the Party of National Alliance (PONA), and he expressed interest to run for office in 2017.