BY WITNEY WASILWA FOR EDAILY

Jacqueline Wolper, the estranged ex-girlfriend of Aiyola hit-maker Harmonize is set to walk down the aisle with her new man just a few months after parting ways with the Tanzanian singer.

Wolper’s new man has been identified as Sadiq Athanas; a man with little to no social media presence. Sadiq has been reported to be a musician and producer.

Sadiq is said to have already paid the dowry price, with Jacqueline announcing the news via a video on her Instagram.

“I am so happy and positive about everything that’s going on. Nikiwa nakaribia kuanza safari yangu ? jambo la furaha sana kwenda kwa bibi Moshi. I feel so blessed,” wrote Jacqueline.

Jacqueline dumped Wasafi singer Harmonize in 2017 after the singer was rumoured to have cheated on her with an ex-lover.

Harmonize, who was in a relationship with Wolper as at the time of the cheating allegations, was reported to have also been seeing his former girlfriend; a lady only identified as Sarah.

Wolper, who claimed she and Harmonize never had an issue with appearing together in public in the past, said she got suspicious when Harmonize asked her not to post photos taken during a birthday party the star had thrown for her. 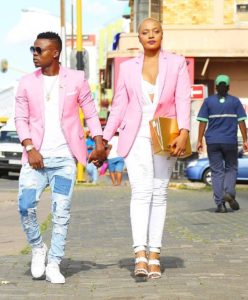 It is then, she added, that she decided to post the photos and was confronted by Sarah who asked her what she was doing with his man.

Jacqueline has since moved on and is well into a good year if the wedding bells she and her partner just sounded are anything to go by.